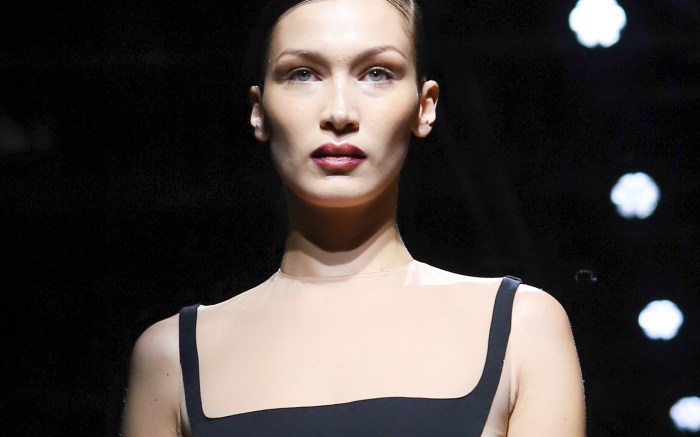 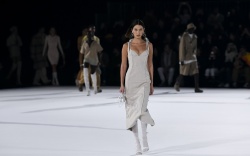 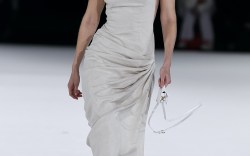 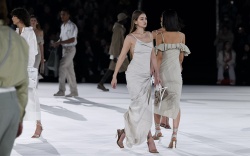 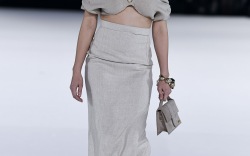 Bella Hadid is the queen of ’90s ensembles, and her latest outfit is no different. The 23-year-old model paired her white cropped box-tee with low-slung brown corduroy trousers as she stopped to talk with her friend and professional photographer Laurie Lynn Stark.

For shoes, Hadid opted for a pair of black leather loafers. She completed her look with a small white purse and pulled her short hair up with a ’90s-esque brown hair clip.

She accented her outfit with gold jewelry pieces from stacked bangle bracelets to large gold hoops.

Hadid and Stark kept themselves safe — Stark with a face shield and Hadid with a white mask.

This isn’t the first time that the model has stepped out in a pair of oversized trousers. When filming for her MTV VMA presentation in New York City, Hadid chose to pair her sheer black bodysuit with sleek black oversized trousers

For Hadid, ’90s and early 2000s style trends continue to be part of her daily wardrobe. She often wears crop tops with oversized button-ups and low-slung pants. For shoes, Hadid loves a good pair of Doc Marten combat boots, but her off-duty style varies from Vans to Converse to By Far designer heels.

As for Hadid’s recent choice of footwear, loafers have made a comeback this season and black loafers are a popular staple for any businesswoman’s closet. Shop styles inspired by Hadid’s look below.