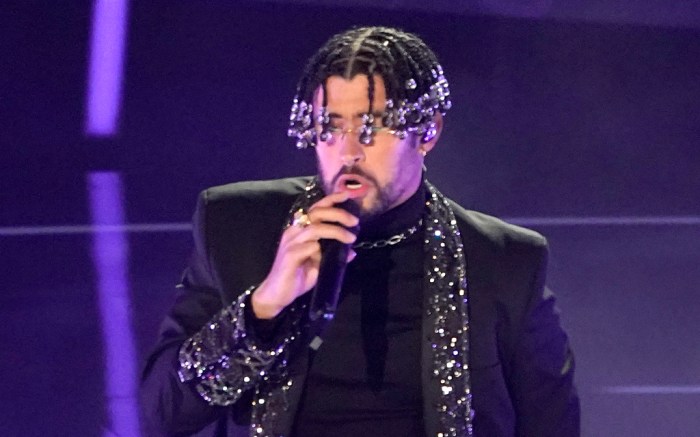 Bad Bunny took the stage at tonight’s Billboard Music Awards to perform his hit track “Yo Perreo Sola” alongside Ivy Queen and Nesi.

For his performance-ready look, the Puerto Rican singer went bigger and bolder than ever in a glitter-trimmed black suit complete with embellished cuffs and lapels


The real kicker of the look came beyond the suit and down to his footwear. The musician boosted his look with heeled boots, a growing style for men amongst celebrity trends seen on the likes of Harry Styles and Swae Lee amongst other stars. The silhouette also included a pointed-toe design and patent leather upper.

As if the heeled lift wasn’t enough, the boots also were adorned with dangerously spiky spurs across the ankle.


The 2020 Billboard Music Awards air live tonight from The Dolby Theater in Los Angeles at 8 p.m. ET on NBC and celebrate the best in the music industry. Kelly Clarkson returns to host the show for her third year in a row and Post Malone leads the nominees with 16 different nods in 15 different categories. Lil Nas X follows suit with 13 nominations, right ahead of Billie Eilish and Khalid both with 12 awards up for grabs.

When it comes to shoes, Bad Bunny is on his game this year. The singer joined forces with Crocs in September to create special glow-in-the-dark clogs. The “Glow Up” clogs come in an all-white colorway with specialized Jibbitz charms inspired both by outer space and by the Puerto Rican singer himself. Along with a reimagined take of a fire emoji, the charms also include classic glow-in-the-dark stars inspired by the ones kids loved to use to light up their childhood bedrooms.

Ahead, find heeled boots for men that will give you both a boost of style and confidence just like Bad Bunny.

Click through the gallery to see more of the best on-stage looks from the 2020 Billboard Music Awards.