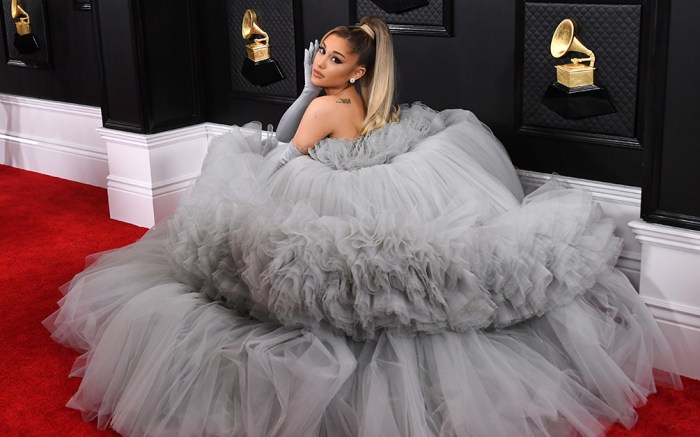 Ariana Grande arrived in princesslike fashion to the 2020 Grammy Awards tonight, held at the Staples Center in Los Angeles.

The pop star showed up in style wearing a dramatic gray-blue ball gown with matching gloves. The gown was a custom piece from Giambattista Valli, which the brand rarely does. Grande put together the standout look with the help of her wardrobe stylist, Law Roach, who also works with Zendaya, Kerry Washington and Tiffany Haddish.

On her feet, the singer wore Christian Louboutin heels. The shoes had custom grip on the bottom to give Grande additional stability as she walked the carpet.

The Nickelodeon alum pulled together her look with her signature high ponytail and diamond stud earrings.

Grande is nominated five times tonight, including in the Record of the Year and Album of the Year categories, for “7 Rings” and “Thank U, Next,” respectively. Additionally, she is one of the evening’s performers, joining a star-studded lineup that includes Billie Eilish, BTS, Demi Lovato and more.

The A-lister is no stranger to the Grammys, having previously been nominated six times. She received her first Grammy Award last year, winning Best Pop Vocal Album for “Sweetener.” She was not in attendance at the ceremony.

Click through the gallery to see more stars on the red carpet at the 2020 Grammy Awards.