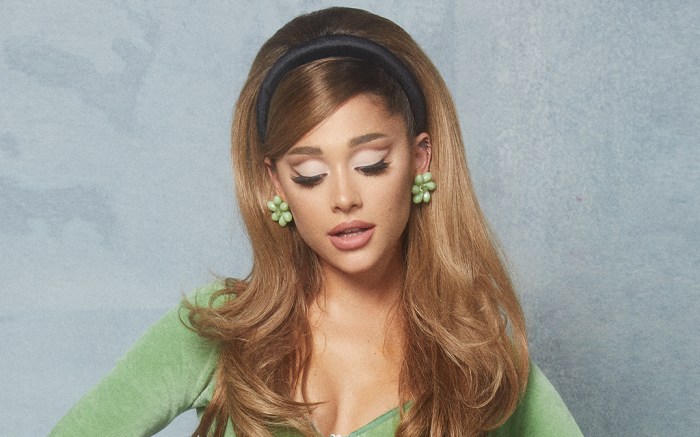 For the album art ahead of the music video, Grande took inspiration from the 1960s and style icon of the decade, Twiggy, in a two-piece set. Accenting her look with voluminous hair, retro makeup and a lifted headband, the “Rain On Me” singer modeled a green long-sleeve velour crop top matched to a coordinating mini skirt in the album artwork.

In the accompanying music video for the new single, Grande took a different route that led her from the 1960s to the Oval Office. The 27-year-old posed as the President of the United States in a move promoting female empowerment and the versatility of women in the workforce.

positions out now 🤍 directed by @davemeyers

While Grande’s shoes couldn’t be seen in the album artwork, the Grammy Award-winning artist has never been one to shy away from an elevated footwear moment. In fact, the 5-foot-3-inch singer more often than not opts for taller heels and platform lifts in everything from her on-stage looks to her off-duty style.

When she isn’t in boots, the hit musician keeps things casual in Nike Air Force 1 kicks, Crocs clogs and Naked Wolfe chunky sneakers amongst other styles. Her career in fashion extends beyond just a stylish closet, though. She was named the face of Givenchy’s fall ’19 campaign and previously partnered with Reebok to help debut a brand new silhouette for fall ’18.

Channel Ariana Grande’s retro look with these pieces inspired by her “Positions” look.

Click through the gallery to see more of Ariana Grande’s unforgettable style evolution throughout the years.