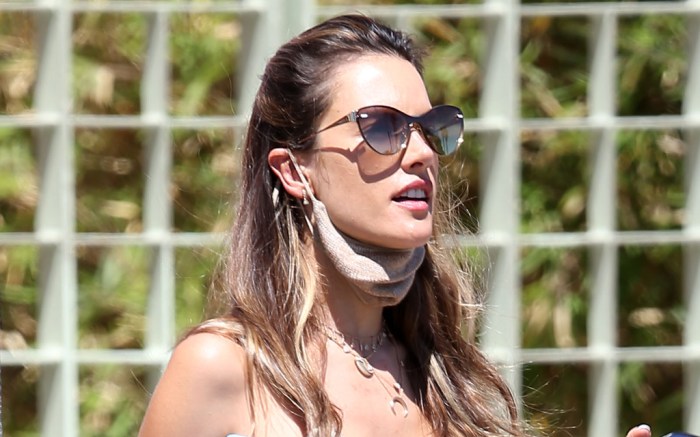 Alessandra Ambrosio looked ready to transition from lunch to the beach as she went to a restaurant in Los Angeles yesterday afternoon alongside daughter Anja.

The 39-year-old supermodel sported a short romper that featured spaghetti straps, pockets at both breasts and a belt cinching it in at the waist. The playsuit was from Australian label Maurie + Eve and sells on the brand’s site for $108.


For footwear, Ambrosio opted for thong sandals from K. Jacques, a brand whose wares she has worn multiple times over the past five years. The flat style she selected, called the Buffon T-bar, is fabricated from gold and cream leather, with a round toe and a buckle fastening at the ankle strap. The open-toed silhouette — no longer available to shop online — showed off Ambrosio’s bold turquoise pedicure.

The former Victoria’s Secret Angel accessorized with several pieces of jewelry — including layered bracelets, a moon-shaped necklaces and a wristwatch — as well as a neutral-colored face mask and oversize sunglasses. She wore her hair in a half-up, half-down style and carried a handbag from Tod’s.

In addition to her K. Jacques sandals, Ambrosio’s off-duty wardrobe includes plenty of other flat open-toed footwear, from labels such as Havaianas, Birkenstock, Hermes and Saint Laurent. When she’s not in sandals, Ambrosio can often be spotted in athleisure ensembles complete with sneakers. She has been spotted in kicks from the likes of Nike, New Balance and Under Armour. For red carpets and other events, the A-lister unsurprisingly tends to upgrade her look with high heels; she has previously reached for styles from designer brands such as Giuseppe Zanotti and Rene Caovilla.

While she is best known for her lengthy tenure as a Victoria’s Secret Angel, Ambrosio’s fashion credits stretch beyond that. She has walked the runway for VS as well as  top labels such as Tommy Hilfiger, Philipp Plein, Moschino and Balmain. What’s more, Ambrosio has appeared in campaigns for footwear brands such as Schutz, Pretty Ballerinas and XTI Shoes. Plus, the catwalker has her own swimwear line, called Gal Floripa, which she launched in 2019.

Below, we’ve rounded up some sandals that offer a similar look to Ambrosio’s sold-out pair.

Flip through the gallery for a look at Alessandra Ambrosio’s standout street style ensembles through the years.