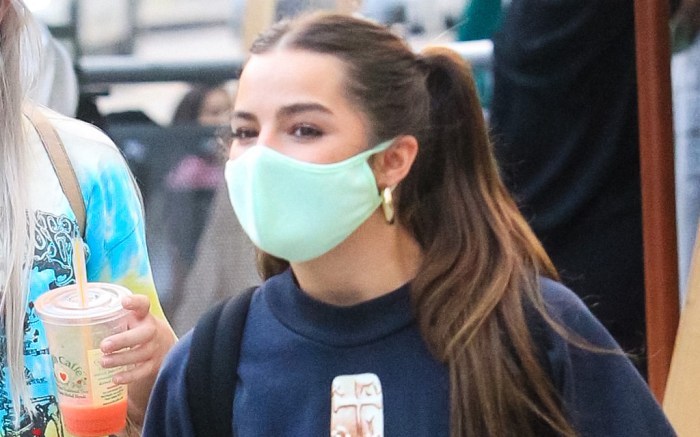 Addison Rae tested out one of the fall’s biggest styling trends with a little help from Kanye West.

The TikTok star stepped out for a shopping spree yesterday in Los Angeles and showed her take on the pantless trend in a “Jesus Is King” sweatshirt from Kanye West’s line of merchandise; similar designs can be found on the resale market from $258 to $357 courtesy of StockX.

The effortless “pantless” trend has returned to the celebrity style scene amidst growing desires for comfy-chic apparel and athletic-inspired silhouettes during the current climate; stars like Kendall Jenner, Hailey Baldwin and more have frequented the combination in recent weeks with more on the horizon as fall starts to settle.

When it came to footwear, the influencer once again looked to Kanye West. Her Adidas Yeezy 700 V2 “Static” sneakers released in December 2018 and quickly became a must-have style thanks to their effortless gray and white colorway and a signature chunky midsole. Combining panels of smooth suede, textured nylon and leather overlays, the pair debuted with a $300 price tag. Nowadays, you can find the sneakers reselling anywhere from $720 to $1,049 at StockX.com.

As for Addison Rae, Adidas Yeezy is just one of the many labels in her everyday rotation. The Gen-Zer is a major fan of one special silhouette from Nike in particular; the brand’s Air Force 1 sneaker first hit shelves in the 1980s and has since become a cultural icon and must-have footwear style for the younger generation. From “Stranger Things” actress Millie Bobby Brown to musician Madison Beer, these affordable and easy-going sneakers can be found in a variety of street-style inspired looks from the younger generation.

On top of trending sneakers, Rae has started her own beauty line, Item Beauty, and starred in a recent campaign for American Eagle.

Check out the gallery to discover more stars who can’t get enough of their own Adidas Yeezy footwear.