Worst-Dressed at the 2020 American Music Awards, According to You 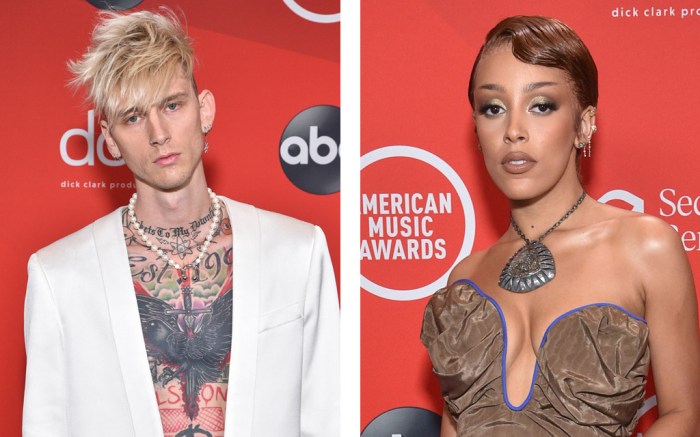 From Jennifer Lopez to Megan Fox and Doja Cat, the biggest names across all industries graced the stage with their on-trend looks and daring duds. Not everyone was a fan of their ensembles, though. Users across Twitter took to the social media app to share their disdain for the mix of designer ensembles at the 2020 American Music Awards.

Ahead, FN rounded up a few of the worst-dressed stars of the night — according to you.

One user, Jewel S, kicked things off by voicing their distaste for the evening’s outfits as a whole, writing “Worst outfits EVER!!! No elegance here,” in response to images of a few major celebrities’ ensembles.

Adding to the list of chosen worst dressed, a few users called out Justin Bieber and Shawn Mendes’ outfits during their performance of their new duet, “Monster” and during Mendes’ solo performance in the evening as well. From deeming Bieber’s outfit “f ugly” to calling out Mendes’ for “always wearing them ugly blouses,”  it was clear not everyone was in support of the duo’s ensembles.

Why He Always Wearing Them Ugly Blouses Lol #AMAs #ShawnMendes

Another star that was called out for her performance attire was Katy Perry. The musician opted for a Canadian Tuxedo featuring a loose-fitting Acne Studios denim jacket and slip-on heels, leaning towards a more casual ensemble for the occasion. The relaxed outfit earned her one user’s title of “worst look of the night,” though.

#AMAs awarding worst look of the night to Katy Perry & Derek Hough. What were they thinking?

Doja Cat also received a bit of flack for her ensemble across social media. One Twitter user said the Vivienne Westwood design was simply “ugly af” as another compared it to a scene from “The Little Mermaid.”

No shade 😅😅 But @DojaCat dress is givin me little mermaid fresh out the sea vibes 🤣 #AmericanMusicAwards pic.twitter.com/PpHCZ5w2Yi

One star in particular whose look drew confusion and remarks was The Weeknd. The singer arrived with his face bandaged along with bruised makeup in a dramatized warning against drunk driving and the injuries it can cause. Fans were still unsure though about the choice and the message he was trying to send.

The Weeknd got his head looking like the produce aisle #AMAs pic.twitter.com/yicA00fcS5

he has worn they same outfit for the whole era… seriously enough is enough #AMAs pic.twitter.com/aYtnjpV1vP

Click through the gallery to discover more red carpet arrivals at the 2020 American Music Awards.