Celebrities Sound Off on #Megxit, Shoe Trends and More at 2020 Critics’ Choice Awards 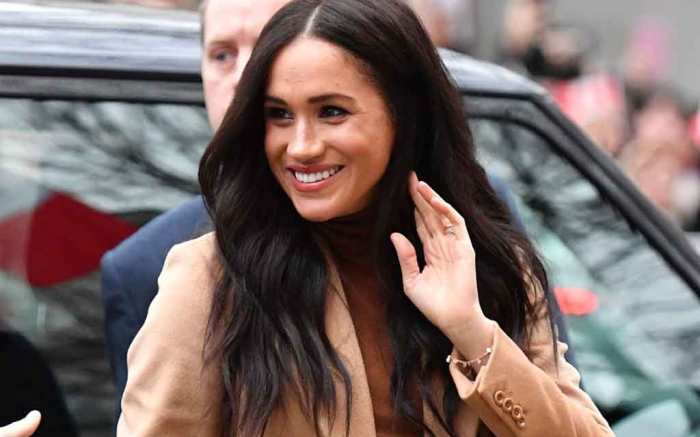 The 2020 Critics’ Choice Awards brought the best in television and film to Los Angeles as stars walked the red carpet in head-to-toe designer looks.

FN had a chance to speak with a few of the celebrities at the awards show, and they sounded off on trends like square-toe footwear and thong-sandals as well as Megxit — Meghan Markle and Prince Harry’s decision to step back from their royal duties and split time between North America and England — and more.

Footwear News: What was the biggest challenge in costume design for “Dolemite Is My Name?”

RC: “We had 75 different changes and most were made out of fabrics like double-knit polyester, just like it was in the ’70s yet it was almost 100 degrees outside. The challenge was, ‘how do we keep our main character cool and comfortable in these outfits?’ We reserved most of the costume onset so he wouldn’t have to walk from his trailer to the set in it and we tried to make the best of time.”

FN: What can you tell FN about the shoes in this film?

RC: “We made all of Dolemite’s shoes because Rudy Ray Moore had incredible shoes when he originally played Dolemite, so they were all custom made. There was cutwork, there was stripes on the shoes, it was a little bit like an Elton John moment with Dolemite. The biggest snafu was after wearing platform shoes every day, it became difficult for Eddie [Murphy] to perform in the shoes, so I made him a pair of platforms out of sock-type tennis shoes — and I hear he danced into the makeup trailer in them.”

FN: What was one style moment that stood out for you in the movie?

RC: “When T.I. says, ‘you’re a little bit doughier,’ I love that suit; we called it strawberry pie and I feel like it dialed in as far as color palette and it reminds me of Gucci patterns and things you see where texture is covering the whole piece.”

SWJ: “That happened to me during ‘Us’ actually; I didn’t really get my character from the script, but once I put on the costume I felt like Zora and I feel like a lot of actors have that experience.”

FN: Here’s something burning on every American’s mind right now: Megxit. If you were in Meghan Markle’s shoes, what would you do?

SWJ: “I trust what Meghan Markle does and I think that it’s actually a smart decision. It’s funny, I saw someone on Twitter said ‘Meghan Markle and her husband’ and that made me laugh.”

FN: What are your thoughts on thong-sandals and square-toe shoes?

SWJ: “Thong sandals are a pass for me because I rarely put on sandals. And square toe? No, there has to be some kind of point so you know which is for left and right.”

FN: What about animal prints?

SWJ: “I love animal print, but it has to be done in a classy way, you can’t have all animal print. It has to have a solid color and an animal print like black and leopard looks really pretty on people.”

CA: “We actually wear the underwear from the ’50s on the set [of ‘The Marvelous Mrs. Maisel’] and every now and then I’m like, ‘please let me wear pantyhose,’ but there were no pantyhose then only garters, stocking, girdles bras and slips. But, once you put it all on it’s like in ‘The Wizard of Oz’ when it goes from black and white to color.”

MSB: “For me, it was a wig, I was on stage doing a stay play called ‘Earth Village’ and I was playing a mom who is an ex-drug addict; they got me this finger wave wig for her and I didn’t feel like her until I put on that wig. Something about putting the hair on and smoothing it out and seeing myself not looking me, that was it for me.”

FN: Here’s something burning on every American’s mind right now: Megxit. If you were in Meghan Markle’s shoes, what would you do?

MSB: “I’m loving all of it, give me more! I probably would do the same, she went there and was like, ‘This guy doesn’t have any of his own money? Listen, I made my own money in America, let’s take our little baby Archie and get the heck out of here, I’m a queen where I’m from.'”

FN: What are your thoughts on thong-sandals and square-toe shoes?

MSB: “No to square-toe shoes and no to thong-sandals, never. If I see a man in thong sandals, it’s a no. My husband is banned forever from wearing thong sandals.”

FN: What about animal prints?

MSB: “Cheetah print describes me. And it looks good on dark-skin women.”

See all the red carpet arrivals at the 2020 Critics’ Choice Awards.