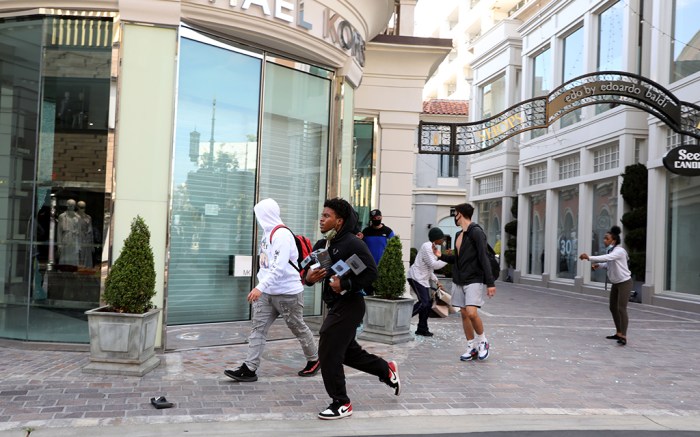 At The Grove, a kiosk for the Los Angeles Police Department was set on fire, while the Nordstrom store next door was broken into. Several other stores in the shopping center, including Nike and J.Crew, were also subject to looting.

Breaking: Widespread looting is ongoing at The Grove in Beverly Hills, California. Rioters have set a police outpost outside the mall on fire. pic.twitter.com/aIoNlayQFt

Additional videos and images showed damage to shops on Rodeo Drive, home to numerous designer stores. Among the stores looted were Gucci and Alexander McQueen.

Looting on Rodeo Drive now too. Gucci broken into. pic.twitter.com/1qbHnkfqA3

While much of the protests have been peaceful, there have been incidents of destruction in several cities, particularly during the evening and late-night hours. In New York’s SoHo, damage occurred last night at Adidas, North Face and more stores, while Chicago’s Magnificent Mile saw destruction to Neiman Marcus, Nike and Macy’s. Target closed over a dozen Twin Cities outposts after a store in Minneapolis was destroyed on Wednesday, while Nordstrom experienced damage to a Seattle unit in addition to its outpost at The Grove.

Floyd, a 46-year-old unarmed black man, was killed on Monday in Minneapolis by police officer Devin Chauvin after Chauvin knelt on Floyd’s neck during an arrest. Chauvin has since been taken into police custody and charged with third-degree murder and manslaughter. Floyd’s death has sparked widespread outrage across the United States — fueling ongoing conversations about racial inequality and police brutality and causing protests in major cities from coast to coast. Brands and retailers — such as Nordstrom, Nike and Reebok — have also spoken up, calling out the injustices faced by African Americans.