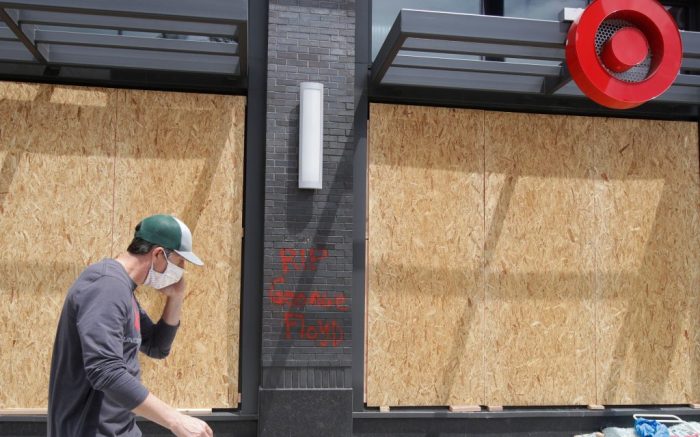 Major nationwide brands and retailers have temporarily closed their stores as demonstrations continue over the death of George Floyd, an unarmed black man, at the hands of Minneapolis police.

Target, Walmart and more stores have announced widespread closures or adjusted business hours amid national unrest sparked by Floyd’s killing last Monday. Protests in metropolitan cities from coast to coast have spanned from peaceful to riotous, with some leading to lootings that have left store windows shattered and many shops vandalized.

As America mourns Floyd, here are the retailers shuttering their doors.

The Minneapolis-based retailer has temporarily shut down six locations after several of its stores had been robbed. Until further notice, its outposts at Broadway Oakland, Calif.; Buckhead South Atlanta, Ga.; South Loop Chicago, Ill.; Lake Street Minneapolis, Minn.; Uptown Minneapolis, Minn.; and Washington Square W Philadelphia, Pa., are closed. It has also scaled back store hours at a number of units nationwide.

A number of the brand’s stores across the country have been ransacked, including its location in New York City’s SoHo neighborhood. According to The Wall Street Journal, Adidas has made the decision to temporarily close all of its United States-based outposts. FN has reached out to the company for confirmation.

Several dozen of the Bentonville, Ark.-based company’s stores were shuttered on Sunday in an effort to protect employees and customers. Today, Walmart shared that damage as a result of lootings have made it unclear when affected outposts would be able to reopen. It added that it would continue to monitor information from law enforcement as well as social media, plus evaluate situations at a local level, to determine further closures. “We’re monitoring this situation closely as it develops and will continue closing stores in select markets as a safety precaution for our customers and associates,” a spokesperson said.

The Portland, Ore.-headquartered brand, which was also affected by the riots in Manhattan, is shuttering some of its impacted stores in North America. In a statement to FN, the company said, “Nike supports free and peaceful protests and we do not condone violence. We are closely following the protests occurring across the country.” It did not confirm how many locations were closed and when it plans to reopen those doors.

FN will continue to update this story.