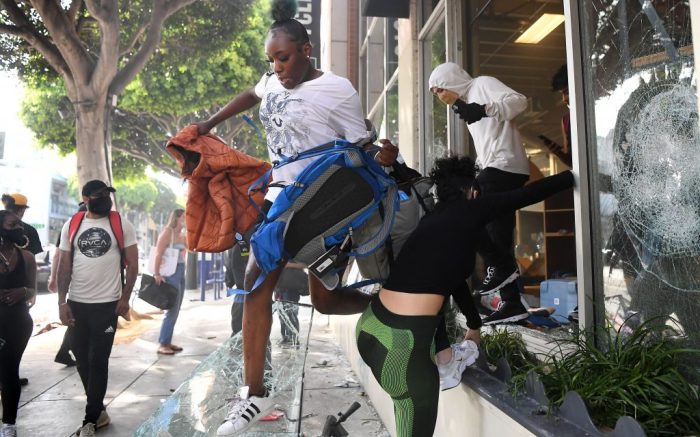 REI was among the stores hit Sunday afternoon. Video showed protesters attempting to thwart violence by putting themselves in front of the store — but later video showed persons hauling clothing and other items out of the shop.

As looting takes place in Santa Monica on Sunday, a couple of protesters put their lives in danger by standing in front of the REI store to stop the ransacking. More info: https://t.co/f5veEdZl6p pic.twitter.com/eqRgBduFCf

Down the block, video footage showed dozens of looters entering a Vans outpost and exiting with stolen sneakers and other goods. Nike, Gap Kids and Patagonia were also among the stores looted, and individuals were taped tossing boxes out the back of an Amazon Prime vehicle.

Looters Break Into Vans Store In Santa Monica And Steal Merchandise: Our cameras caught multiple people breaking into a Vans store and emerging with shoes and other merchandise. 31 May 2020 pic.twitter.com/XtIZQwXijT

Absolute Chaos along 4th street in Santa Monica… looting with impunity on both sides of the street. No police in sight. We’ve watched this happen to dozens of stores for 45 minutes now… pic.twitter.com/WOdEhIz3th

Santa Monica officials said they believed the majority of looters were not associated with the protests. The city arrested over 200 individuals on Sunday. In attempt to prevent further destruction today, a curfew will go into effect in Santa Monica’s business district beginning at 1 p.m., with a citywide curfew to take hold at 4 p.m.

Across the country, unrest has mounted in the wake of the death of George Floyd, a 46-year-old black man who died on May 25 in Minneapolis. Floyd was killed after white police officer Derek Chauvin knelt on Floyd’s death during an arrest. Chauvin has been fired from the police force and charged with third-degree murder and manslaughter.

Although protests across the country have mostly been peaceful, there have been reports of looting in major cities from coast to coast — including New York, Chicago and Washington, D.C. as well as Los Angeles — with most violence coming in the late night hours. In recent days, major brands and retailers have spoken up against the injustices faced by African Americans and called for change — including companies that typically take a stance on social issues as well as those that have historically shied away from doing so.