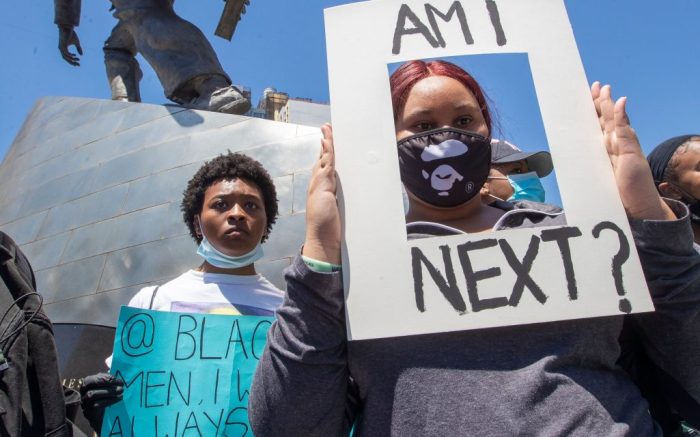 Brands are speaking up about racial inequality — and they’re also offering their financial support.

National unrest continues in the wake of the death of George Floyd, an unarmed black man who was killed in Minneapolis on Monday, May 25 by white police officer Derek Chauvin. Floyd’s death is the latest in a string of killings of African-Americans at the hands of cops and other would-be authority figures — and it has ignited grief and anger from coast to coast, sparking petitions and protests as Americans band together against systemic racism.

Numerous fashion and footwear brands — including both those that have consistently been vocal on controversial issues as well as those that have historically been silent — are professing their grief and outrage. But more than just speaking out, a growing number of brands have announced financial commitments to fight racial injustice.

Below, FN rounds up the brands and retailers that are making donations to fight racism.

Asos announced on Saturday that it will make a donation to a “relevant organization” in the coming days. “We’re constantly working on ways to support positive change and we’ll continue to give a voice to important conversations, today and always,” the brand wrote.

Silence isn’t an option. We share the sorrow and outrage of the world over the grave injustice leading to the tragic loss of George Floyd's life, along with Breonna Taylor, Ahmaud Arbery, Tony McDade and so many other Black lives. We may be a brand, but we’re also made up of real people who care deeply about standing alongside ALL our ASOSers. That means we also understand just how important it is to put meaningful action behind all that we do. So, we will be making a donation to a relevant organization in the coming days. We’re constantly working on ways to support positive change and we’ll continue to give a voice to important conversations, today and always. We hear you and we stand with you.

Fabletics, Kate Hudson’s athletic wear label, said in a Saturday Instagram post that it would donate $50,000 to the American Civil Liberties Union to go toward “its fight for racial justice and immediate change.”

The time to make a difference is now—and it starts with each and every one of us. Fabletics is donating $50,000 to support the ACLU in its fight for racial justice and immediate change. #togetherwechange

Fila on Sunday announced via Instagram that it would donate $100,000 to Black Lives Matter, encouraging followers to “take the necessary steps alongside us for a more equal and just tomorrow.”

“While we are saddened by the looting of our Los Angeles store, we know that our property can be rebuilt, our merchandise can be replaced, but the lives that have been taken cannot,” Flight Club wrote on Instagram. The sneaker shop has donated funds to the Bail Project and is encouraging followers to join it.

While we are saddened by the looting of our Los Angeles store, we know that our property can be rebuilt, our merchandise can be replaced, but the lives that have been taken cannot. ⁣ ⁣ Link in our bio to donate.

H&M has announced a $500,000 contribution to three organizations — the NAACP, the American Civil Liberties Union and Color of Change — to assist in their efforts for racial justice. “We’re committed to using our voice and influence to do our part and stand up against racism and discrimination,” the retailer wrote.

We believe in equal rights for everyone. We stand with and support the Black community – today and every day. We understand that this goes far beyond a social media post. We’ve learned the hard way how much work we still must do to live by the values we believe in. We’re committed to using our voice and influence to do our part and stand up against racism and discrimination. Today, H&M group will donate 500 000 USD to @naacp, @colorofchange and @aclu_nationwide. We support these organisations in their efforts for justice, economic rights and democratic empowerment. Let’s change. Together. #BlackLivesMatter H&M

“We are committed to utilizing our voice and resources to stand for the safety of our citizens, friends, family and neighbors in productive ways that we pray will spur the change we all need,” Kith wrote, sharing the names of several organizations, including the ACLU and the Minnesota Freedom Fund, that it is supporting.

Nili Lotan is setting a “Vote” muscle tee to encourage customers to register to vote in the upcoming election. 100% of profits will be donated to the NAACP Legal Defense and Education Fund; the shirt retails for $125 at NiliLotan.com.

Via Instagram on Saturday, Puma said it was donating to the Minnesota Freedom Fund. The sneaker giant encouraged followers to do the same.

We need to take action together. We are choosing to support the Minnesota Freedom Fund. Donate to the MN Freedom Fund at link in bio & text FLOYD to 55156. #justiceforgeorgefloyd @mnfreedomfund

The parent to Tommy Hilfiger and Calvin Klein announced on June 4 that it is donating $100,000 each to the National Urban League and the NAACP Legal Defense and Education Fund. In addition, the PVH Foundation is matching 100% of donations made by North American corporate associates throughout the month June.

Sarah Flint, one of Meghan Markle’s favorite footwear designers, announced via Instagram that she will begin making a monthly contribution to the NAACP’s Legal Defense Fund, as well as supporting other organizations “that fight for equality.”

“I don’t often comment on current events on my social media, but I can't stay silent. What happened in Minneapolis to George Floyd this past week was devastating, and part of a larger, unacceptable pattern. Mr. Floyd was treated as less than a human. I am learning how I can do my part to support those who for too long have been silenced and need to have THEIR voices heard. I know support means not being silent. It means carefully examining my own outlook and biases. Support means being outraged and taking actions that fight for a better America. I will not be a bystander when I can be an upstander. I know being not racist is not enough, and that I will strive each day to actively be anti-racist. I am making a monthly donation to the NAACP Legal Defense Fund and will be supporting other organizations that fight for equality. I am committed to learning, listening, and working to make the world more just.” -@xosarahflint

“Over the next three months, we are donating $100,000 to organizations that are working to combat racial injustice, starting with a donation to Black Lives Matter,” wrote Toms on Instagram Monday, encouraging followers to also stand up for racial justice.

(1/2) #GeorgeFloyd, #BreonnaTaylor, #AhmaudArbery, #TonyMcDade and countless others. We will not forget them, and we know that we need to be part of the change. Over the next three months, we are donating $100,000 to organizations that are working to combat racial injustice, starting with a donation to Black Lives Matter (@blklivesmatter). We will also continue to listen, learn, and act. Join us.

On Saturday, Philadelphia and Washington, D.C. sneaker retailer Ubiq announced that it has donated to the Minnesota Freedom Fund and asked its followers to support a number of organizations.

No one is free until we’re all free. It’s time to speak up, but it’s also time to listen. Our team is rallying around ways we can help, but we are all ears and open to dialogue from our Philly & D.C. communities about other resources and nonprofits that need support, and other ways we can show up. #BlackLivesMatter #JusticeforGeorgeFloyd #JusticeforAhmaud #JusticeforBronnaTaylor #JusticeforAll

Ugg on Saturday announced a $50,000 donation to the American Civil Liberties Union.

We stand with you. UGG is proudly donating $50,000 to the American Civil Liberties Union who provide legal assistance wherever civil liberties are at risk. #BlackLivesMatter #UGGTOGETHER