Meet Let It Happen, Three Dutch Sisters Who Love to Dance in Nike 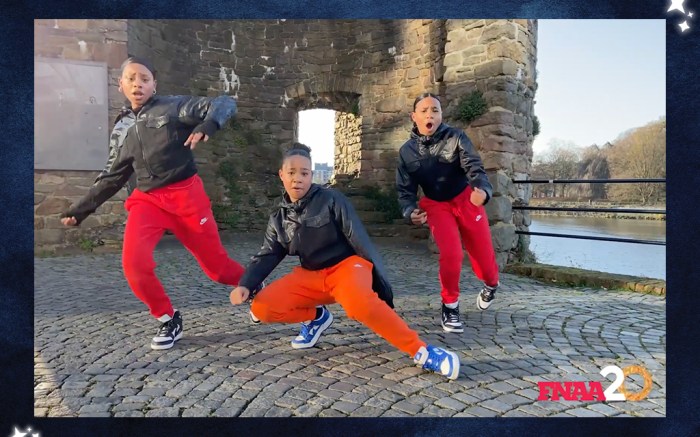 Those girls can dance.

You may recognize Let It Happen from their viral videos, such as their tributes to James Brown or appearances on “The Ellen DeGeneres Show.” The group has even danced with Usher, too.

Tonight, the Dutch dance trio, who also happen to be sisters, continued to amaze while dancing in FN’s Shoe of the Year, the Nike Dunk, during the 2020 FN Achievement Awards show.

Norah (14), Yarah (14) and Rosa (12) Mukanga have been sharing self-choreographed videos on the Internet since 2018. But the sisters told FN recently that they’ve been dancing since they could barely walk, thanks to their parents who filled their home in the Netherlands with hip-hop, jazz and R&B music.

“In our home, there was always music. It felt very natural to dance because we loved it so much,” said Yarah during an Instagram Live Q&A with FN.

During the presentation to honor Nike with FN’s Shoe of the Year award for 2020, the sisters danced while maxed out in Swoosh apparel and Nike Dunk sneakers against a scenic backdrop on their hometown in Meerssen, a municipality located in the southeastern part of the Netherlands.

Since Nike Dunk’s debut as an on-court staple for prominent college basketball teams across the United States in the 1980s, the Peter Moore-designed shoe continues to remain as relevant as ever.

“Nike never disappoints us,” said Yarah about the dance troupe’s favorite brand during the trio’s interview with FN last week.

“You can mix it with any style, and I love all the colors,” added Norah. “I really love every design of the Dunk.”

In addition to the Nike Dunk, the sisters love to dance in the Jordan 1 Low and Air Max 90.

“We made a lot of videos and traveled around the world with them,” said Rosa on the Jordan 1 Low.

What’s next for the sisters?

“We have ideas to develop a movie in 2021, and also if it’s safe again to travel and do shows in person,” said Yarah.

You can keep up with Norah, Yarah and Rosa, as well as their younger sister Ebu Jazz (6), who occasionally makes an appearance with them on Instagram, YouTube and TikTok.