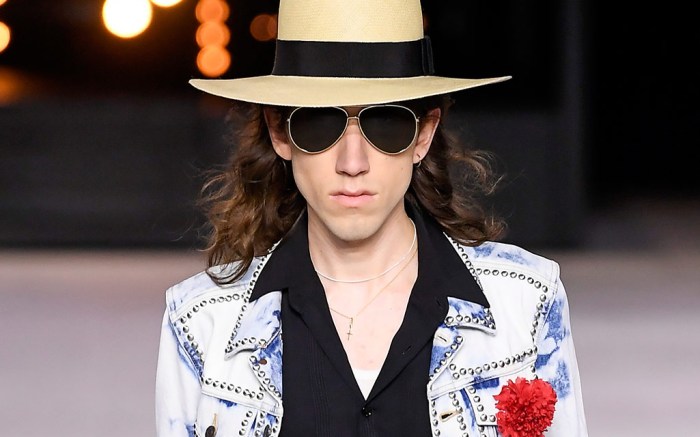 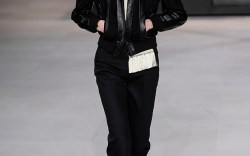 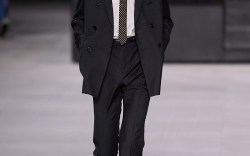 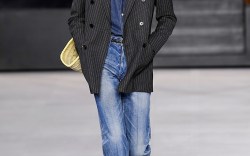 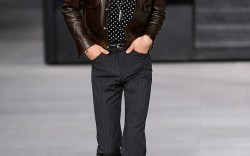 The Celine man has loosened up and got his mojo on. Tonight in Paris, in the now customary, custom-made Celine box that constitutes his show venues, Hedi Slimane got groovy.

First look, a suit with skinny tie, had a hint of sparkle and tassel loafers, which emerged from a contraption like a time-machine in a ’70s movie, set the tone.

Spring ‘20 loafers and ankle boots in python and croc were reassuringly pointed of toe. Many also came in white. As did a large number of retro-style tennis shoes.

Last season Slimane decreed the loafer the new sneaker, but this time he’s decided the two can co-exist in harmony.

Slimane was also not averse to a slogan T-shirt or a straw bag bearing the legend, “I have nostalgia for things I probably have never known.”

The designer, it seems, isn’t averse to irony either. He’s well aware that the customers who’ll be buying those pointy shoes and teaming them with his flared pants, stone-wash denim and wide-brim hats are unlikely to have experienced the decade from which they hail.

Surprise hit were gold sandals, which made their first appearance with white socks and striped overalls. If you haven’t heard of vintage BBC TV kids’ show “Andy Pandy,” Google it. Then compare and contrast.