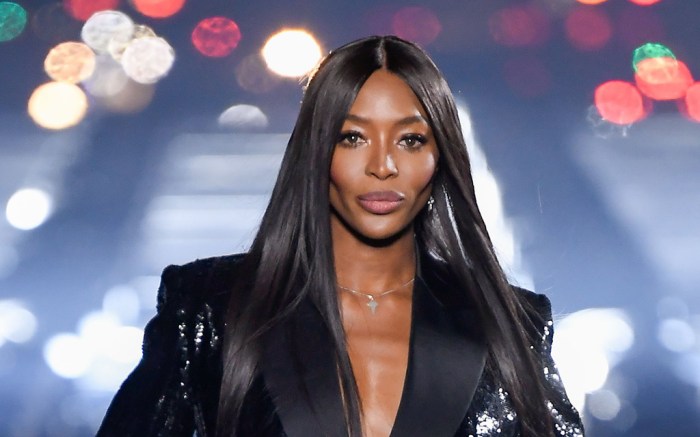 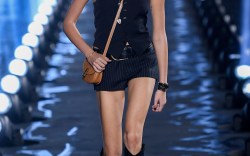 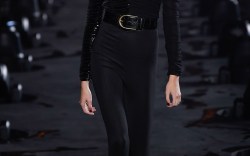 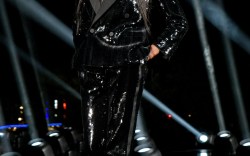 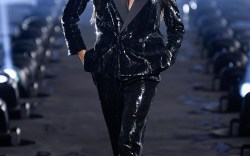 I wouldn’t usually start a review with the end of the St. Laurent show, or any show for that matter, but when your final look is rocked by supermodel Naomi Campbell, it would be rude not to.

St. Laurent creative director Anthony Vaccarello always presents his collections in two parts, the second being an ode to the house’s famous Le Smoking (black tuxedo). Today in Paris, Campbell modeled a completely sequined version, cinched at the waist and teamed with those toe-cleavage ankle-strap pumps that were featured throughout the show.

She can afford to be choosy these days — from memory, she closed Kim Jones’ Louis Vuitton finale show alongside Kate Moss, and both opened and closed what we later learned to be Azzadine Alaia’s last show.

As for the rest, footwear was about tall, knee-grazing boots, a slight dip hinting at a Western silhouette, ruched boots with burnished gold and leopard print, plus Opyum alternative, the strappy Cassandra sandal bearing the label’s logo flush against the front of the foot.

Special mention goes to that stirrup pant stiletto vibe on Kaia Gerber. She modeled a grand total of three looks in the show.

While the footwear will certainly set Kering tills a ringing, it won’t have the same editorial traction as the label’s last “It” shoe, that iconic crystal slouch boot. But maybe that’s the point. While 99.9% of the population is nowhere near able to afford it, the dazzling shoe certainly brought attention to the brand, and more important, vast sales across the more commercial lines.

But give Vaccarello time and doubtless something else will materialize. After all, it’s pretty difficult to replicate “It” shoe success of that magnitude. Along with that, Gucci, now Bottega and Saint Laurent — all under the aegis of luxury conglomerate parent Kering — have a record of producing “It” shoes. As for who’s next in line, only time will tell.

A final word on the staging, which featured phalanxes of robotic strobe lights set into holes in the runway itself. Models circumnavigated them with aplomb. Showgoers, not so much. I saw at least one guest come a cropper while attempting to make a speedy exit in the dark. It was a sneaker-wearing male as opposed to an Opyum sporting lady. Just sayin’…

What Bottega Veneta, Sara Battaglia and Rothy’s Did Right at Milan Fashion Week