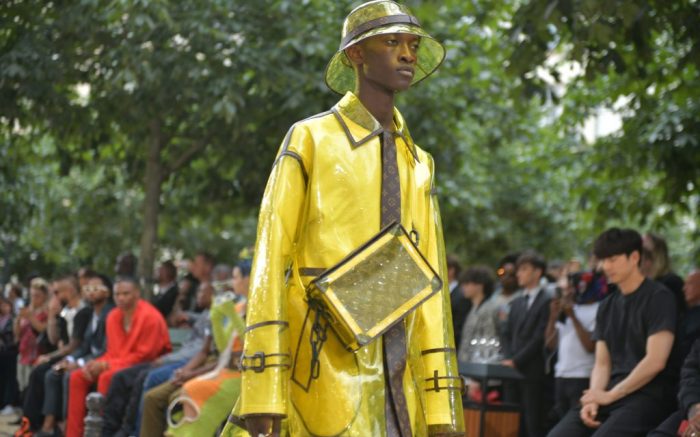 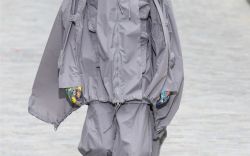 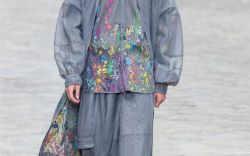 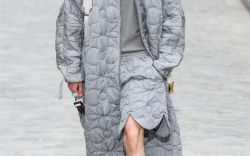 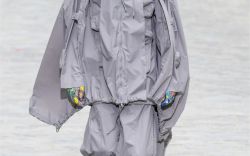 The Louis Vuitton show invitation was a large flat-packed kite, and the footwear in creative director Virgil Abloh’s spring ’20 men’s collection was just made for flying it.

Last season, Abloh’s backdrop was a New York street facade made of plywood like a Hollywood stage set, but this time around he was keeping it real. Today, he commandeered a tree-lined Parisian square, the Place Dauphine on Île de la Cité in the middle of the River Seine.

Vuitton was the antithesis of Rick Owens’ show earlier today, which made a statement about American politics. Owens wrote in his show notes that the U.S. president’s “fixation on a border wall” motivated him “to explore my personal Mexicanness” — hence the Azteca ceremonial music and “megalace” runner collaboration with artist Thomas Houseago, of hieroglyphic-inspired wall sculpture fame.

Abloh’s concept was a return to childhood innocence — hence the kites and the rubber boots. The latter came in shiny monogram-neoprene-mix styles and as lace-up rangers with neoprene cuffs. Some came painted with naïve floral motifs, evoking the floral carpet at Abloh’s own label Off-White show yesterday. Runners, meanwhile, had the ’90s vibe of the retro mood that’s been gaining momentum as the Paris Fashion Week Men’s spring ’20 shows progress.

The structure of a kite also evokes the geometric cuts of Abloh’s suiting and the garment accessory hybrids that have become his Vuitton signature. Don’t forget that as well as a talented showman asserting his label’s hegemony over Paris, he’s also a trained architect.