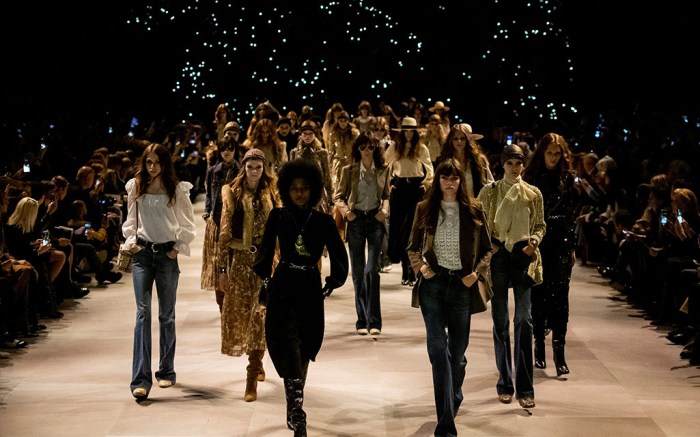 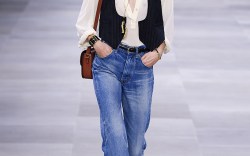 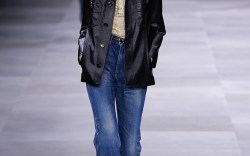 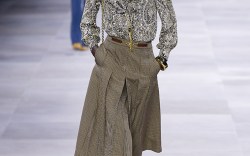 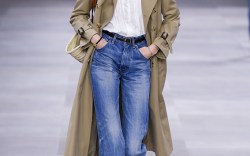 It took a couple of seasons, but Hedi Slimane has found his Celine formula and he’s sticking to it. His high-fashion version of E=mc2 involves the ’70s, androgyny, a whole lot of kick-ass over-the-knee boots, plus K-pop sensation Lisa.

Now for the boots. Slimane has refined his fall ’19 wedge and chunky-heel versions for a more streamlined silhouette with a slimmer heel and, often, the new Celine signature horsebit, aka a snaffle. The boots came in glossy black, brown and tan leather, suede and a smattering of snakeskin.

Yes, the bourgeoise who made her debut for fall ’19 is back, but she has since ditched the tweed, discovered lame and frilled collars, found herself a boyfriend and started borrowing his jeans and sneakers on weekends.

Slimane’s Celine menswear has gone through a stormy period, especially the spring ’20 show in June, when it found its mojo with flared jeans and plenty of sneakers. It, therefore, stands to reason that critical acclaim should cross the genre divide. This show actually got an ovation.

Whether these developments are winning back some of the old Celine contingent or exciting Slimane’s own personal fan base remains to be seen. In any case, Celine is certainly picking up a new market along the way.

For the record, Lisa has some 25.4 million followers on Instagram. Compare that to Céline’s 2 million and Slimane’s 180,000. If LVMH can score just a handful of Lisa’s following, then the new Céline equation looks like it could add up.