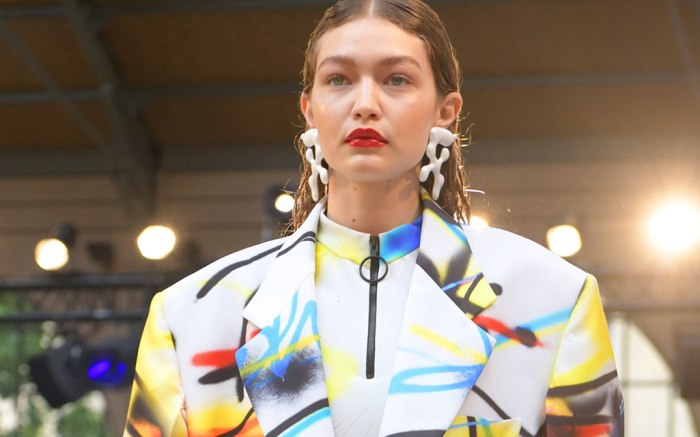 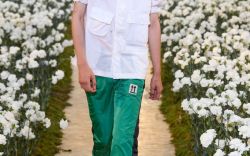 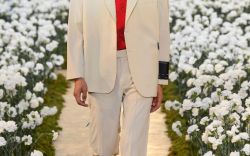 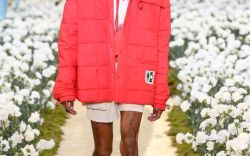 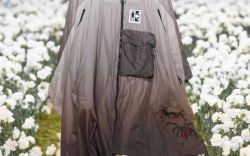 Virgil Abloh joked last season that he was going to quit the fashion lark and take up gardening. While he hasn’t gone that far, his menswear show today in Paris was a fragrant affair. He turned the Carreau du Temple venue in the City of Light’s artsy Marais district into a field of white carnations for his spring 2020 show.

The first shoe to trample on said flowers was a new Nike Dunk collaboration sneaker in orange and blue. He called it out on his Instagram feed just before the show as the FL VA OW Nike “DUNK.” The shoe also comes in a blue and white iteration. With Nike’s Sacai Dunk hybrid shoe collaboration ubiquitous this season among the ranks of the fashion fraternity, the old-school sneaker is very much in vogue.

That graffiti-daubed opening look sported by Sheck Wes, was a capsule collaboration with Futura, more of which was featured throughout the collection. As for the blue sculpture positioned amid the flowers, that was a sculpture also created by the artist.

Although Abloh continues to collaborate with Nike since the mammoth Nike Ten partnership, he didn’t show a collab on his fall ’19 runway, so it’s good to see the two back together for spring ’20.

The designer generally uses his men’s runway to showcase pre-fall looks from his womenswear collection, and this season was no exception. He tapped Gigi Hadid and friends to model painterly looks, with Hadid in a jacket teamed with high-heeled sandals that featured a chain detail running from heel to sole.

Watch FN’s interview with Virgil Abloh at our Footwear News Achievement Awards below.

An Inside Look at Givenchy’s Unexpected Footwear Collaboration