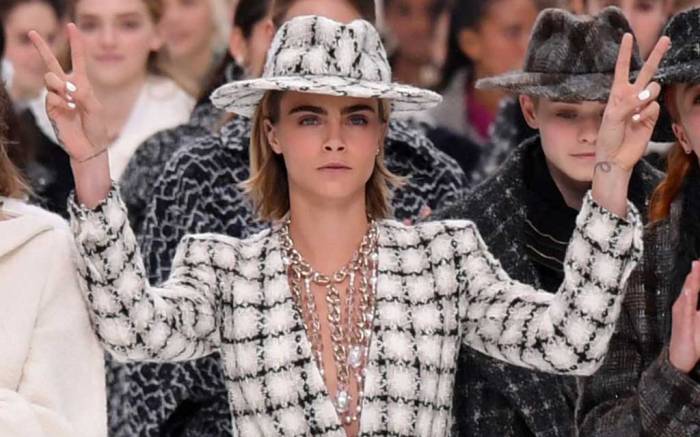 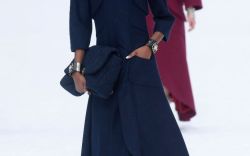 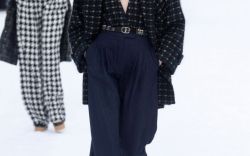 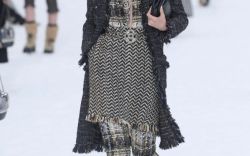 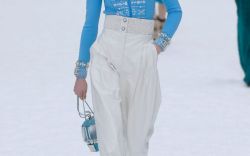 For Karl Lagerfeld’s swan song show, the house of Chanel took things right back to the German roots of the legendary late creative director. Today in Paris, the city’s Grand Palais was transformed into a picturesque Alpine village complete with traditional wooden shuttered ski lodges and crystalline runway, and backdropped by soaring, ice-capped mountain peaks.

Following a minute’s silence as a mark of respect, the Chanel cast emerged from the aptly titled Chalet Gardenia to the tune of gently tinkling sleigh bells. Led by Cara Delevingne, a model troupe including Lagerfeld favorites Kaia Gerber and Penelope Cruz stomped out in off-piste-appropriate platform hikers and cozy shearling snowboots.

The platform hikers came straight up in both black (as seen on Delevingne) and white (as worn by Gerber and Cruz), while the snowboot alternative featured reassuringly chunky studded soles, shearling uppers, again in black and white, with contrast toe caps just like the house’s classic bourgeois pumps. But being snowboots for Chanel snow bunnies, they also featured another house code — the delicate application of pearls around the cuff.

It was, as Lagerfeld said himself, via a “Black Mirror”-esque broadcast at the start of the show, “like walking in a painting.” The only pity being that unlike the Chanel spring ’19 couture show in January where it was actually snowing outside, the snow on the runway today was faux. However, Kaia Gerber and Penelope Cruz dressed as giant fluffy snowflakes more than made up for this meterological omission.

Click through the gallery to see every look in the collection.