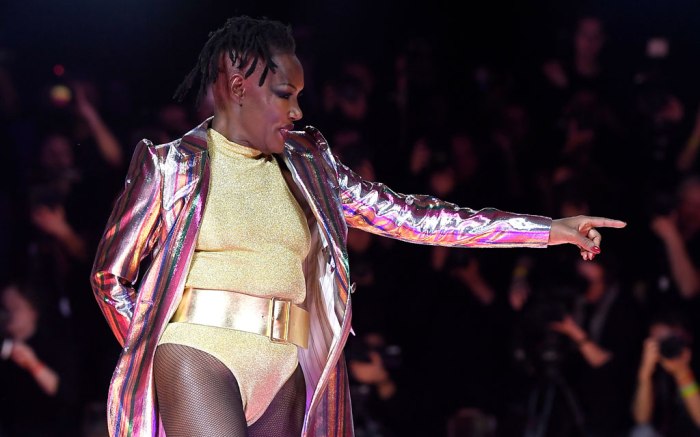 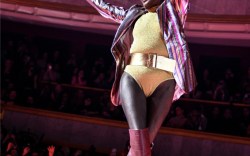 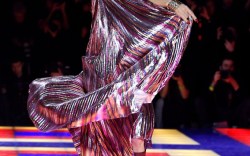 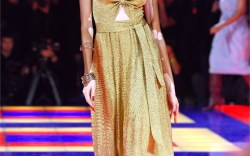 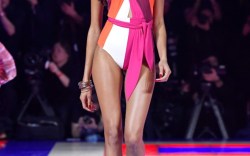 Talk about vintage FOMO. Upon entering Paris’s Theatre du Champs Elysees, showgoers to the TommyNow event were greeted with a roller disco floor, where models in roller skates were whirling and twirling to ‘70’s disco hits on a light-up floor, which was later the perfect setting to showcase the strappy metallic and wooden platforms that walked the party runway.

It was the first showing of Tommy Hilfiger’s and Zendaya’s highly anticipated see-now-buy-now capsule, which was announced in October 2018. The actress and singer is the latest in a long line of stars that the designer has tapped for collaboration, going as far back as Britney Spears upon her debut album tour in 1999.

Featuring a runway that was filled exclusively with models of color, the crowd cheered as top models like Winnie Harlow and Dilone walked down the red, white and blue light-up runway – but they cheered just as hard as size-inclusive models walked.

And they cheered even harder as the model in the last look came down the runway — none other than Grace Jones, who danced along to her own disco hit “Pull Up to the Bumper” in a sequin striped blazer, leotard, oversize gold belt and cognac leather thigh-high boots.

There were party looks aplenty, with aforementioned platforms, colorful two-tone jumpsuits and sequined separates — but there were also a lot of attainable looks, from office-friendly pantsuits to the red-and-white striped tees and tank dresses that showed first. Leather boots in knee and thigh height were done in a cognac-brown leather.

The collection is now available for purchase on the Tommy Hilfiger website.