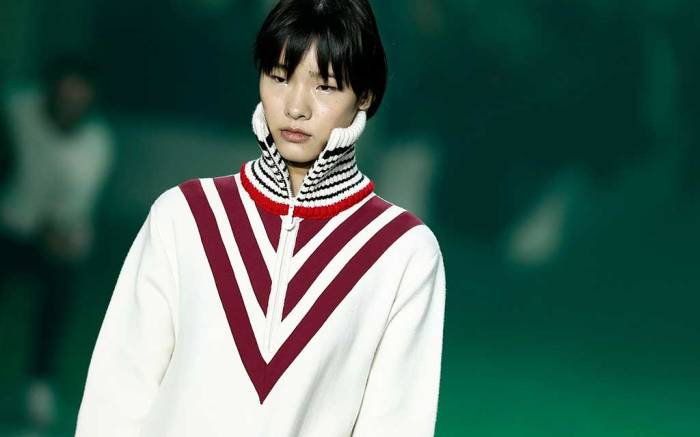 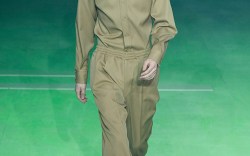 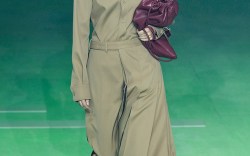 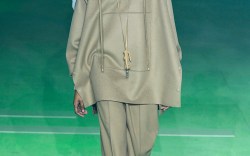 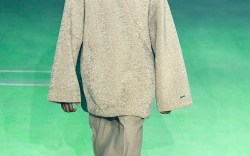 It might have got Serena Williams sent off the court with a hefty fine, but Louise Trotter‘s inspired take on tennis couture scored high in the style stakes. For her coed runway debut today, appropriately staged at the famous Tennis Club de Paris, the brand’s new creative director played a blinder.

She remixed the classic tennis shoe for both sexes — sleek sportif affairs in white or tan with trés OTM (that’s ‘of the moment’ for those uninitiated in three letter acronyms) vulcanized rubber dips, but that was just the start of her reinterpretation of the label’s footwear.

For the show’s female contingent, she introduced brand new sneaker-brogue hybrids with elongated toes, rubber soles and perforated leather uppers for a dressy, off-court take on the fly knit. She further elevated the silhouette with zip-up bottine variants on the theme, the zip-pulls featuring whimsical crocodiles — the Lacoste emblem designed in 1927 by Robert George.

Trotter’s appointment in October 2018 is the very first time in Lacoste’s 85 year history that a woman has been at the helm. And with and her sophisticated hooded trench coats and fluid takes on the classic tennis skirt, the designer, who joined the brand from Joseph, where she won a legion of fans during her nine-year tenure, is guaranteed to rock that Lacoste crocodile with the same verve.

The 8 Most Memorable Lacoste Collaborations