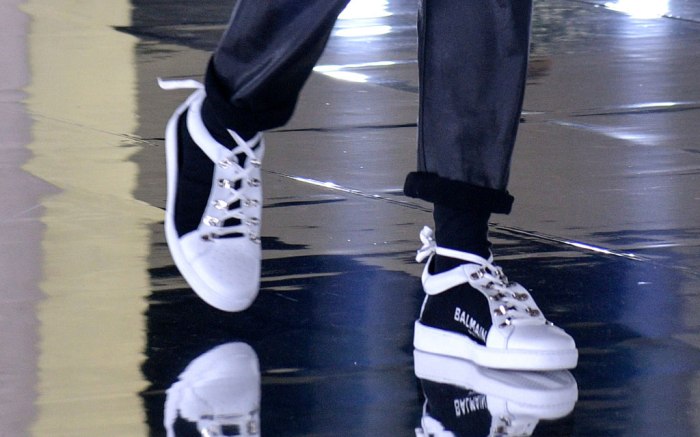 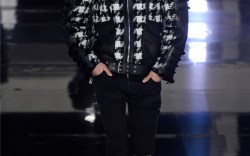 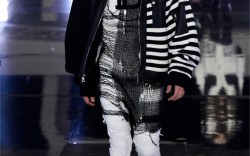 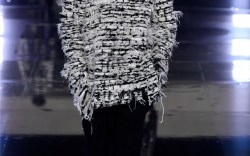 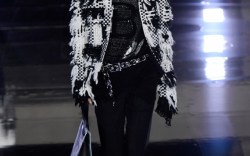 Balmain is relaunching its sneaker collection — and the fall ’19 looks popped on the runway Friday night.

The show, held at a grand Paris Tennis Club, opened with a series of dramatic tailored looks. “When everyone is struggling to be streetwear, it’s important to remember that being a designer is about tailoring and treatments,” creative director Olivier Rousteing told FN backstage.

For sneakers, he explained, working with interesting materials gives them a whole different attitude. “It’s exciting for me to bring that element of couture and craftsmanship to a shoe,” he added.

In the black-and-white themed collection, white sneakers a black strip on the side appeared to feature the new Balmain logo — but it was an optical illusion.

Mirroring Hedi Silmane’s Celine debut show in September, both the shoes and garments in the show were all unisex. This season, from the footwear at Y/Project at Pitti to looks at Off/White, Givenchy. This androgynous movement had turned into a massive trend.

“There was no difference between the boys and the girls in the show,” observed Rousteing. “I want to push a new world where you don’t label and you don’t judge,” he said.

That message, emblazoned on sneakers, bags and shirts alike, was clear: ‘Things have to change’.

Click through the gallery to see the full Balmain fall ’19 collection.