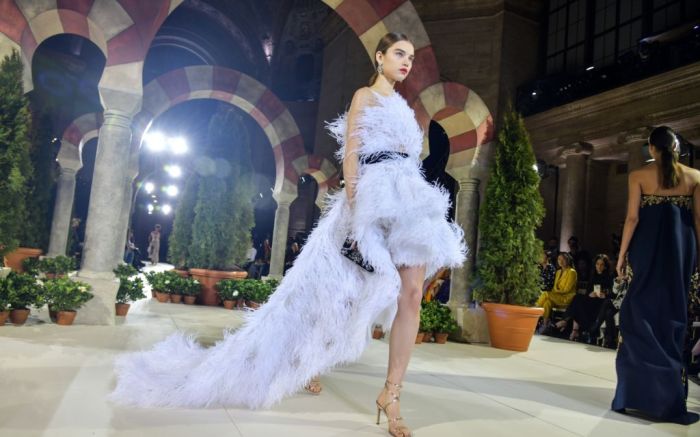 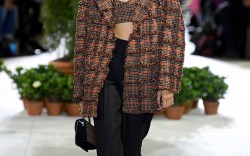 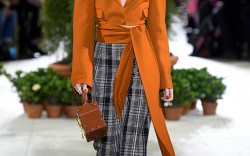 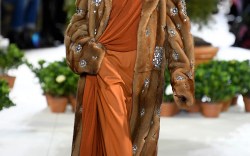 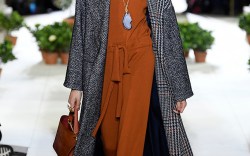 Laura Kim and Fernando Garcia are well versed in all of the design codes of Oscar de la Renta — they did, after all, spend a collective 18+ years working under its late founder before coming back to helm the brand together in late 2016.

But for fall ‘19, the duo is taking some not-so-subtle cues from their own label, Monse — and footwear is a big part of it.

“At Monse we are inspired by menswear, so this is a little injection of that here,” Garcia told FN backstage before the show. That injection includes the George, an unadorned masculine leather loafer with an elongated tongue, simple leather band and zero hardware that the designers sent out with a long houndstooth-and-glen-plaid-spliced coat (very Monse) and a red quilted-silk 1950’s-style strapless dress (very Oscar). “It’s the first time we are doing men’s loafers (at Oscar),” said Garcia. “We named it after our boss’s dog,” he added, referring to Oscar de la Renta CEO Alex Bolen, who also noted the shoe backstage.

(Editor’s note: It seems that everyone in Garcia’s and Kim’s world is dog-obsessed, from Bolen to Monse CEO Renee Prince Fillip, who worked with the duo to collaborate with local shelters on shooting the brand’s pre-fall look book with rescue dogs — a collection that includes a dog-leash-inspired sandal, currently the FN Shoe of the Week.)

Of course, an Oscar show wouldn’t be complete without a strappy sandal, and there were plenty of them to go around — but Kim and Garcia took a twist on the evening staple by showing them in mismatched styles. “You look like you’re wearing two different shoes in the same color tone,” said Garcia. The sandals were shown on a variety of evening looks in the collection (which was inspired by the Mosque-Cathedral of Córdoba in Spain) and remained truly minimal in black, metallic, red and gold velvet with crisscrosses alternating on the ankles and tops of toes. “I think it’s fun to add something to a strappy sandal. (But) they disappear on your leg,” said Kim.

But the best part of sandal situation? Each shoe will be sold separately, not as a pair, allowing clients to further customize their footwear in different colors, in a manner similar to the way earrings are now often sold. “I had to fight for that!” said Kim.