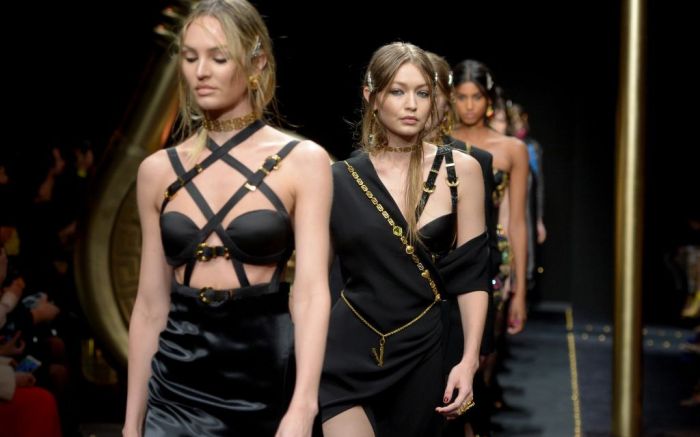 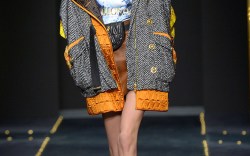 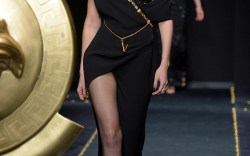 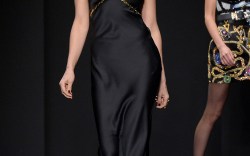 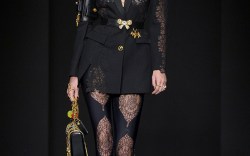 For many non-fashion people — especially those who follow the red carpet more than the runway — the introduction to Versace came in 1994, when Elizabeth Hurley donned a black dress with a dramatic décolletage and a slew of gold safety pins running down the sides to hold it together (it came to be known as “THAT DRESS”.) The British actress wore it to accompany actor and then beau Hugh Grant to the premiere of his new film, “Four Weddings and a Funeral.”

Some 25 years later, Donatella Versace brought this idea back and more  — and just in time for the biggest red carpet, Monday night’s Oscars.

A marquee of supermodels past and present walked the runway in a remix of some of Versace’s greatest hits, from aforementioned safety pins to harness straps. Kendall Jenner wore an oversized blazer with with pins and a leather armband, Gigi Hadid and Stephanie Seymour sported black gowns with belted shoulder straps and Bella Hadid in a cropped croc-embossed jacket with a lace miniskirt held together by aforementioned safety pins.

But Donatella Versace didn’t wait until Milan Fashion Week to debut the iconic, remixed look. Earlier this month, singer Dua Lipa wore a black-and-white gown to the Grammy Awards, a more literal update to the Liz Hurley dress with safety pins scattered across the front of the bodice.

One could assume that all of the straps and pins would distract from the footwear on the runway, but the bottom halves of the looks were equally as interesting as the tops, and they proved to be — yet again — some of the best runway shoes of Milan Fashion Week. Kaia Gerber walked first in a pair of brown hiker-esque boots with yellow laces, which looked cozy with a pair of cream fuzzy socks and the tweed-and-puffer parka she wore with them. But her second look, a croc-embossed coordinating jacket and skirt, paired with fuchsia strappy pumps decorated with jeweled brooches on the front, set the tone for a totally maximalist footwear offering.

The collection had a little bit of everything, from jewelry shoes and hiker boots to Western-themed mules and satin kitten heels paired with brightly colored laced tights.

See more styles on the runway at Versace’s fall ’19 show.