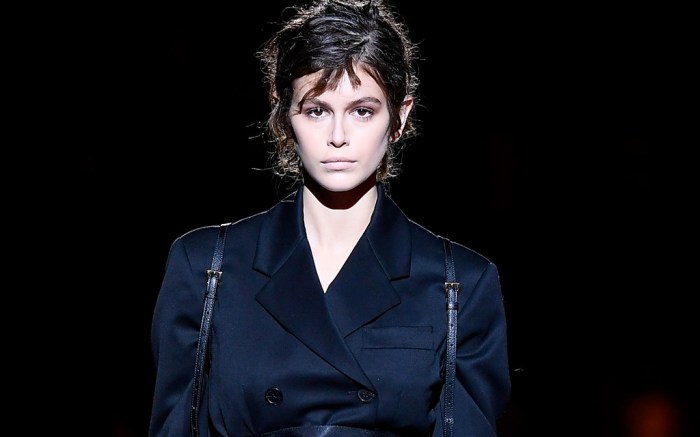 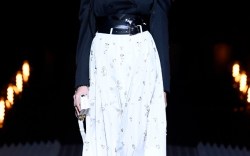 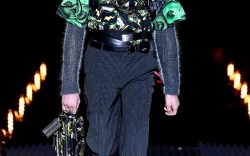 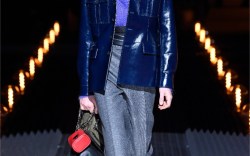 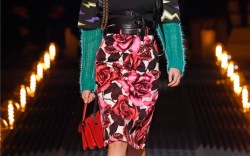 Frankenstein head motifs came daubed on pencil skirts and shirts alike (the show was coed) while lightning bolts like the electrical charge that brought Victor Frankenstein’s monster to life, came both as prints and also as intarsia knitwear.

But back to that fiendish footwear. Lace-ups were done with exaggerated tractor soles and sneakers with supersize rubber flatforms that resembled the tread on car tires. The color palette ranged from sober blacks to Crayola primaries.

Miuccia Prada and Frankenstein author Mary Shelley certainly have common ground and not just because they are both women in male dominated industries.

Remember those espadrille flatform brogues that Prada did circa 2011? The ones with the stripy soles and the crazy waitlists? They were pretty much the first flat to reach “it shoe” status, paving the way for the monster sneaker phenomenon long before we all succumbed to the thrall of the Triple S.

Prada’s dance macabre had a soundtrack to match with strains of The Addams Family theme mixed in with Erasure’s “Tainted Love” and Richard O’Brien’s “Time Warp” from “The Rocky Horror Picture Show.” As for the set designed by architectural firm AMO , that recalled a mad scientist’s lab with its phalanxes of filament lighting and industrial vibes. The foam coating on the floor ensured plenty of bounce — whether you were wearing sneakers on or not.