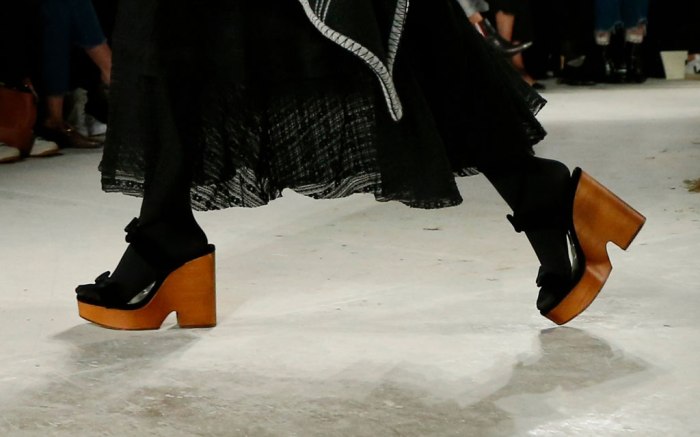 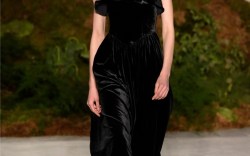 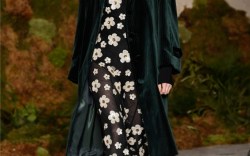 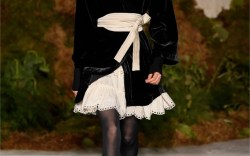 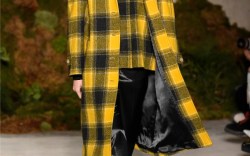 Two years after launching her eponymous collection, Alexa Chung is growing up — and so are her shoes.

Last season, for her London Fashion Week debut, the stylist-turned-designer debuted bedazzled jellies, tapping into childhood nostalgia. But on Saturday, the footwear at her runway show was decidedly more elevated with platform-loafer hybrids taking center stage.

Chung explored the concept of escapism with a show called “Off the Grid,” held in a minimalist space near the St. Pancras train station.

The designer’s group of strong women retreated to the West Coast, Big Sur in particular, wearing sturdy heels that were paired with prim prairie dresses and masculine outerwear in herringbone and plush forest green. The designer dreamt up the show during a trip to California, where she began to imagine a road trip during her birth year, 1983.

“I haven’t been interested in prettiness for a long time, and the world doesn’t look saccharine and innocent to me anymore,” Chung said in her show notes. “So here we are with ‘Off The Grid’ — a gaggle of women have retreated but there’s safety in numbers. They’re regrouping and plotting somewhere on the West Coast where nature is so beautiful and big it’s almost threatening.”

This season, the designer also launched an eyewear collaboration with Sunglass Hut.

Click through the gallery to see the full fall ’19 Alexa Chung collection.