These Balmain Spiked Boots Will Take Your Eye Out 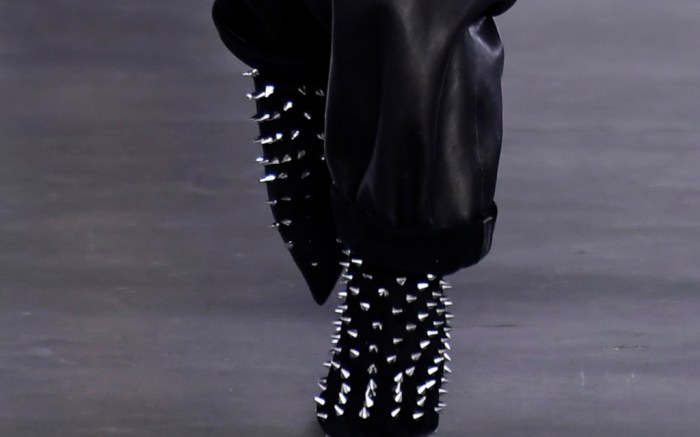 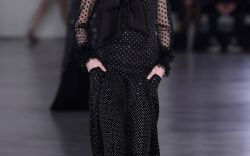 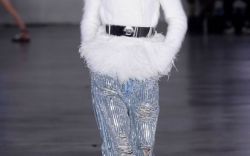 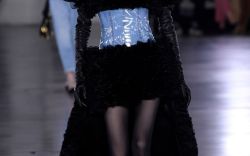 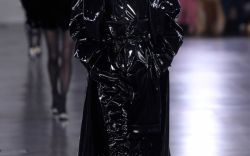 YWhile Eurythmics and Alphaville featured heavily on the Balmain soundtrack, Poison’s “Every Rose Has Its Thorn” and Taylor Swift’s “I Knew You Were Trouble (When You Walked In)” would have been more appropriate.

Today in Paris, Olivier Rousteing’s fall ’19 collection doubled down on spiked studs. It started from the ground up with spiked sandals, strappy pumps, pointed ankle boots, many of which were flat or low-heeled (by Balmain standards, at least) but all of which would take your eye out as soon as you looked at them.

Said downright dangerous protuberances proceeded to work their way up and down the body into everything going — pastel PVC pants included.

These pastel looks, of which there were a wide selection, not to mention the bourgeois diamante headbands sported by some members of the Balmain army, were something of a departure for the designer, but he was making a point. So to speak. The idea being that you don’t have to shave your head and wear a protest T-shirt and combat boots to be a provocateur. Or to be taken seriously as a woman.

“I changed my attitude, and I think the shoes were the most important thing,” he told FN backstage. “A girl can wear flats boots, but she still keeps the Balmain DNA, as she’s someone that is confident, strong and daring.

“She’s not a party girl; she’s a warrior and a powerful woman, a troublemaker and a dangerous angel. She may look sweet like a little princess, but she’s like a rose. It may smell good, but it can also prick you with its thorns.”

Don’t be fooled by the demure demeanor of this Avenue Montaigne princess. She may be wearing a diamante headband, but she’ll kick your posterior into the middle of next week with her little studded bottines.

Check out every look from the Balmain fall ’19 show.

Cara Delevingne, Jennifer Lawrence and More Celebs on the Front Row at PFW