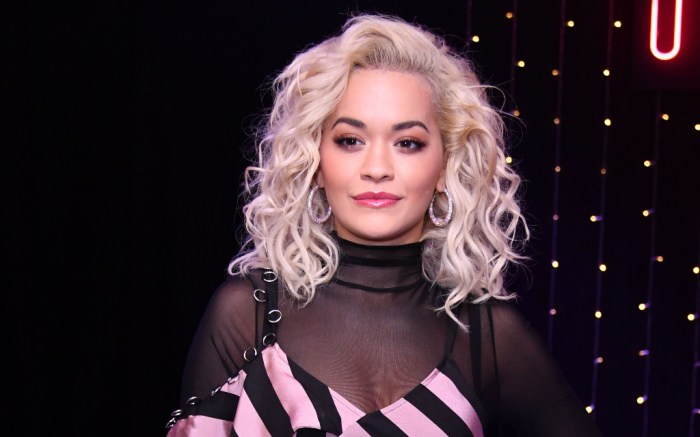 Rita Ora is certainly no stranger to the fashion world.

The multihyphenate has been a staple figure in the sartorial realm for years, fronting campaigns for DKNY, Rimmell, Roberto Cavalli and was the face of Madonna’s Material Girl label in 2013. Also, let us not forget Ora’s longtime collaboration with Adidas that produced more than a dozen streetwear and sneaker collections.

But this month, the blonde bombshell has landed two plum gigs with designer labels, signaling a new level to her influencer status.

Last week, footwear designer Giuseppe Zanotti revealed that Ora is his newest celebrity collaborator, and together they created a collection of punk-inspired sandals, flats and boots that will launch Jan. 24 across select Giuseppe Zanotti stores and major department stores.

And then today, the Escada fashion house announced that the 28-year-old singer and actress is its latest ambassador and is starring in the brand’s spring ’19 ad campaign. Shot by photographer Craig McDean, the images have a larger-than-life feel that matches both Ora’s personality and Escada’s bold new narrative under global design director Niall Sloan.

So why all the sudden attention? For one, the pop star is riding high in the music scene after the release in November of her second studio album, “Phoenix,” which has contributed multiple Top 10 singles to the U.K. charts — including “Girls,” featuring the supersquad of Cardi B, Bebe Rexha and Charli XCX.

To say that the release has been much-anticipated is an understatement. Fans have been waiting six years since her debut album, “Ora,” came out under Roc Nation and Columbia Records. In the intervening time, she’s contributed to numerous singles but failed to secure a major release from Roc Nation, leading to a lengthy legal tussle that ended with her departure from the label in 2016. She soon began work on “Phoenix” under Atlantic Records.

To celebrate the album, Ora is heading out on a world tour starting March 1 that will only raise her already-high profile.

But beyond her star status, designers and brands also say they are drawn to Ora’s unique personality and characteristics.

Zanotti, for instance, cited her creativity and professionalism. “I love working with artists because they’re very efficient,” he told WWD, adding that Ora loves fashion and he loves music. “In both our lines of profession, we need to research everything, everywhere and every day. She’s very multitasking, and I admire that.”

Meanwhile for Sloan at Escada, he was attracted to her fearless and independent approach to style. “Our founder, Margaretha Ley, made her name dressing strong women,” he said in a statement. “Rita embodies the spirit of those women. She knows her own voice, has built her own empire and continues to prove it’s possible to cut your own path with self-belief, talent and a great sense of humor. As such, she is a true Escada woman.”