Exclusive: Something Navy’s Arielle Charnas Gets Serious About the Advantages and Perils of Being an Influencer 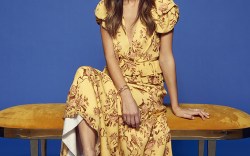 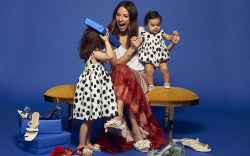 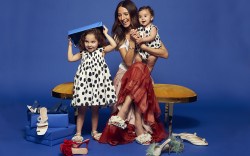 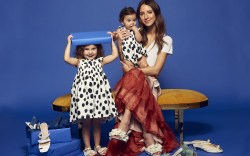 Arielle Charnas sings for her wide-eyed, almost 1-year-old daughter, Esme, to get her to smile for the camera. While the flash from the photographer’s overhead lighting is distracting the baby, Charnas’ firstborn, Ruby Lou, is unfazed by the commotion going on in FN’s New York studio.

The 3-year-old is busy strutting around the set in her mom’s high heels just as if she were playing dress-up at home. Ruby is requesting songs, hitting poses, playing with props — only showing her age with the occasional outburst for French fries. She’s used to the camera by now.

In what seems like a 24/7 cycle, Charnas, 31, has opened a window into her world where seemingly nothing is off-limits for her 1.5 million followers across her social media channels — kids included.

“It’s about bringing something different to the table,” she said on what it takes to stand out. “I tell girls [who want to be influencers] to be so raw. Talk about personal things, life, things that you’re feeling, because there are so many people out there that can connect with that. People are attracted to realness, and brands are, too.”

Charnas, who launched Something Navy as a fashion blog in 2009, has built a fan base that’s fiercely loyal and engaged. “What sets me apart is that a lot of these girls focus on beautiful images, the traveling, the extravagant trips, whereas I’m just at home hanging out in my apartment. It’s not that it’s more real; it’s just a different lifestyle,” she explained.

“Arielle feels like a friend,” noted Eyal Baumel, CEO of digital media company Yoola. “She doesn’t feel like an advertisement on TV or a billboard.” Charnas’ approachable strategy has helped her cultivate strong brand partnerships, thanks in large part to her ability to turn likes into dollar signs. “She’s always had such a power to convert,” Something Navy brand director Tara Foley said. “That’s what she’s mastered.”

The entrepreneur has been working with Bandier since 2014 after her mom bought her a pair of workout leggings from the retailer’s recently opened Hamptons store in New York. Charnas posted the look with her popular #snmirrormoment hashtag on Instagram — and it was an instant hit. “By the next week, every pair [of leggings] in stock was gone,” said co-founder Jennifer Bandier. “We didn’t know what happened.”

Since then, Charnas has been a partner in the company, and she continues to promote the activewear product — whether it’s through dancing videos or shopping posts on Somethingnavy.com.

Her 24-hour Instagram Stories have also proved to be viable, generating waitlists of over 200 people and same-day sellouts of specific items, according to Bandier.

“She has spent the better part of a decade building trust with her followers, and they look to her as a shopping resource,” said James Nord, founder and CEO of influencer platform Fohr, on her ability to move product.

Using the poll and questions features on Instagram Stories, the Something Navy fashion brand was created from customer feedback, according to the influencer. (Charnas is wearing a Johanna Ortiz dress and Something Navy sandals, which are launching in June.)

Charnas’ 20 active brand and retail tie-ups, which are typically focused on sponsored posts, include Shopbop, Tod’s, Net-A-Porter, Supergoop and more.

It is the partnership with Nordstrom, however, that propelled her deeper into the fashion industry.

In September 2017, Charnas teamed with the retailer’s in-house label Treasure and Bond for a capsule collection that reportedly sold $1 million in one day, with items quickly selling out and resurfacing on eBay. One year later, the Seattle-based company took advantage of Charnas’ appeal and launched the Something Navy standalone brand. (Other social media stars such as Chiara Ferragni, Blair Eadie, Leandra Medine Cohen and Aimee Song have also made forays into fashion during the past few years, to varying degrees of success.)

“For me, this was very organic and natural. I’ve grown up shopping at Nordstrom. It was a no-brainer,” Charnas said. “But I remember the night before the launch, I was in bed crying, thinking, ‘What if no one buys anything?’”

The September 2018 release caused the Nordstrom site to crash, which proved her commercial viability.

“It blew away expectations,” said Jennifer Jackson Brown, EVP and president of Nordstrom Product Group. “What we saw was a partner who was really engaged with her audience. She’s a hard worker, and what she values is making sure she’s in direct communication with her followers.”

Charnas’ instinct to crowdsource and include her fans in the design process has been crucial to the label’s success. “She was able to communicate with the customer while we were actually develop- ing the pieces. We were able to react accordingly and go into development with what the customer said they wanted. Anytime we can have the customer actually help [create] the product they are interested in buying is a better experience for them, and obviously it’s better for us,” Brown said.

Since the debut, there have been five collection drops, featuring jackets and coats, swimwear, jewelry, shoes, loungewear, dresses and more. Charnas credits the line’s popularity to its accessibility.

“[Shoppers] knew the price points were below $200,” she explained. “[And] lots of my followers were Nordstrom shoppers already. That alone really elevated it.”

When it came to specifically building out the footwear assortment, designing on-trend shoes inspired by luxury labels she loves, such as The Row and Christian Louboutin, was also key.

“Shoes are my life. That’s the one thing I consistently splurge on. It’s the most important part of an outfit to me,” Charnas said. “I love designer shoes, [but] a lot of my followers can’t afford to spend $1,000, so when creating the line, I wanted to offer a great price point.”

So far, the partnership has been mutually beneficial.

Nordstrom tapped into a new customer base and connected with Charnas’ millennial-centric audience — a consumer segment that is crucial for many department stores.

For Charnas, it has been an opportunity to immerse herself in the world of retail, learning about design, production, marketing — and most importantly, about her customers.

“They love to see items styled more than one way. Even though I say it’s affordable, to the 23-year-old working in the city, a $150 dress is expensive, and they want to know they can wear it more than once. I’m trying to focus on that,” she said. Charnas often shows multiple styling options with Something Navy product on Insta- gram Stories ahead of launches.

She also said she’s learned that her followers are interested in high-end fashion trends to some degree, but they still want something that’s wearable.

The shoe collection, which is the second-largest category after ready-to-wear, focuses on day-to-night styles including flats, sandals, mules, boots and more.

As she continues to build the business with her team, Charnas has another valuable sounding board: her father, Oded Nachmani, who owned the Coolwear label for 22 years.

With that backing, Charnas is forging ahead to put her stamp on the next generation, too.

In March, Something Navy expanded into the kids’ category, and Charnas’ daughters are seen modeling collections on Nordstrom.com.

“People are always asking me what my kids are wearing,” she said on the launch. “Ruby loves it. She thinks she gets dressed just to get her photo taken. She knows I make clothing, and she likes to say she’s wearing Something Navy.”

Last month, Diet Prada, an Instagram account that calls out fashion copycats, accused Something Navy of knocking off a Prada headband and posted side-by-side product shots. The situation soon escalated into a public battle when the post started collecting comments and threats against Charnas’ family. She claimed that Diet Prada promotes a community of negativity, while the account defended its original post and said Charnas was deflecting.

“Listen, we aren’t reinventing the wheel with the Something Navy brand. We are creating fast fashion, affordable clothing that girls want to wear every day,” she said on the matter. “I didn’t think I needed to explain myself there, but what I did fight back on was when people were saying my kids should commit suicide. The messages were so terrible. Over a headband. It was scary. After two days of being attacked, I reacted.”

“Ruby doesn’t understand why everyone knows who she is. I don’t mind if [followers] say hi, but I don’t allow photos of [my kids],” she said. “When they try to get in a conversation or touch [my kids], I get nervous and uncomfortable.”

As Charnas approaches the 10-year anniversary of Something Navy in August, it’s clear she has no plans to slow down.

There are six more launches slated for the rest of the year with Nordstrom, Charnas said.

At the same time, she’s scaling back on new brand partnerships to focus on expanding Something Navy at a time when some insiders say the influencer market is getting overheated.

“Our attention span is getting shorter, and there is so much content out there,” Baumel said. “[Some influencers] will disappear. The smart ones will stay. The key is in the execution.”

Charnas is hoping to stay ahead of the pack by evolving the Something Navy platform into its own contemporary lifestyle destination. She’s connecting with consumers on multiple fronts, including Somethingnavy.com, which offers stories from Charnas and her growing team of six employees, shoppable product and styling advice on go-to products. The Something Navy Instagram account, an extension of the website (and separate from Charnas), has 200,000-plus followers and its own brand partnerships.

“This is a media platform. There’s a website, Instagram and other verticals,” Foley said. “Arielle doesn’t have to be the talent in those assets. We can’t use her for everything, so that’s why building the Something Navy channel is a priority.”

And as social media continues to rapidly evolve, Charnas recognizes that Instagram’s relevance could fade over time. “I want to make sure our website offers everything we feel we offer on Instagram,” said Charnas, who aims to stay ahead of emerging tech trends. She acts as a strategic adviser for the development in new apps and invests in select startups across all industries. The red-hot beauty business is top of mind as she plots her next moves.

With plans to create more produced video content, talks for a reality show are also in motion at Something Navy.

In addition, Charnas is launching a podcast to help reach new audiences and increase engagement. “We are keeping it in the circle of our team, family and friends. We want to [zero] in on personal stories we talk about on the web- site,” she said. “We just have so many that we’ve yet to share.”

Jamie Chung On Being Asian-American in Entertainment, Influencing With a Purpose & ‘Standing Up for Those Who Don’t Have Voices’