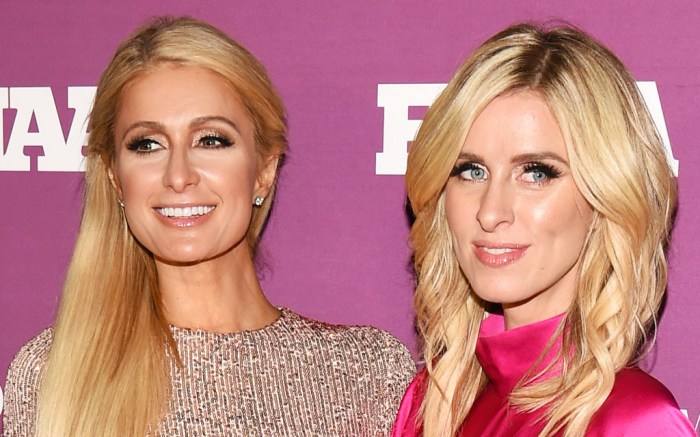 Paris and Nicky Hilton were a stylish sister act Tuesday night in New York at the 2019 Footwear News Achievement Awards — often referred to as the Shoe Oscars. The duo attended the show to present Amina Muaddi with the award for Designer of the Year.

Paris shone in a glittering midi-length, long-sleeve dress with glittering jewelry. On her feet, she wore matching rose gold stilettos.

Meanwhile, sister Nicky Hilton popped in a hot pink satin minidress with a high neck and a ruched skirt. Her shoes of choice: trending black and pink python-print slingbacks. Snakeskin footwear and hot pink are two of this season’s biggest trends, and both styles can easily add personality to an ensemble. The fad is continuing into the spring, and the chic colorway comes from Nicky’s spring ’20 French Sole line.

Nicky knows a thing or two about footwear since she released a capsule collection with comfort brand French Sole New York in February. The partnership was an organic one as Nicky began wearing the brand since her days in high school.

“I love Nicky’s French Sole Shoes,” Paris added. “Every time a new collection comes out, I get a whole box with new shoes.” Paris herself has a namesake footwear line that’s been thriving for over a decade.

When presenting Muaddi with her award, Paris said she’s a designer for “It girls.”

Nicky added: “There is a lot of hard work that goes into making it look so effortless. In the past decade, Amina has learned the ins and outs of the fashion and footwear worlds; she has gone from Footwear News Emerging Talent to one of [these] industries’ biggest design stars.”

In accepting her award, Muaddi thanked her mother for giving her the biggest gift: the gift of freedom. “It seems like a basic right, but for me to have the freedom to live the life I wanted and to do the work I wanted, it’s not often given to women that come from my side of the world, said Muaddi. “My mother believed and made me believe that I can be anything I want to be.”

“I want girls who come from where I come from to believe that you can touch the stars,” added the designer, who grew up between Jordan, Romania and Italy.

Also in attendance at the FNAAs were Billy Porter, who ushered Jimmy Choo’s Sandra Choi into the FN Hall of Fame. Some of the other presenters included Adriana Lima for Puma (Brand of the Year), Tove Lo for Doc Martens (Shoe of the Year) and more.

Click through the gallery to see all the celebrity red carpet arrivals at the 2019 FNAAs.

Billy Porter Says His Major Fashion Moments Are ‘Not An Accident’