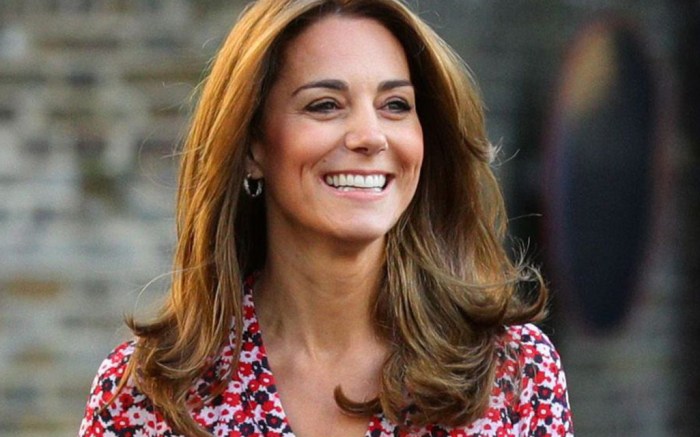 Pity the other mothers at Thomas’ Battersea school in South London. When it’s fellow parent Kate Middleton dropping her offspring at the school gates, there’s simply no competing.

Today was the first day of the new school term and also the first day at the school for Princess Charlotte. She joins her older brother Prince George, third in line to the throne, who already attends the establishment.

The Duchess rose to the occasion wearing a 215-pound (around $265) red dress with a pattern of blue and white flowers by American designer Michael Kors.

The long button-front frock was cinched elegantly at the waist with a black crocodile print belt. Middleton teamed the look with a pair of navy high heels in suede.

While the outfit wrote the playbook on school-gate style, everyone was also talking about the Duchess’ glossy new highlighted hairdo which appeared rather more Beverly Hills than Battersea.

Princess Charlotte’s uniform consisted of a blue pinafore dress worn with a white blouse, navy cardigan with red stripes, regulation black shoes and white socks. The princess, who celebrated her fourth birthday on May 2, will be known simply as Charlotte Cambridge at the school.

The Duke and Duchess of Cambridge are very pleased to share a photograph of Prince George and Princess Charlotte at Kensington Palace this morning. The photo was taken shortly before Their Royal Highnesses left for Thomas's Battersea. 📷 Kensington Palace

The royal family was pictured together this summer at the King Power Royal Charity Polo Day match. While husband Prince William competed in the game with brother Prince Harry, the 37-year-old Middleton doted on her adorable royal children. She wore a pink L.K. Bennett dress with her favorite Castañer Carina espadrille wedges.

Click through the gallery to see Kate Middleton’s favorite shoes.