Exclusive: J Balvin Says He Wants to Change the Perception of Latinos 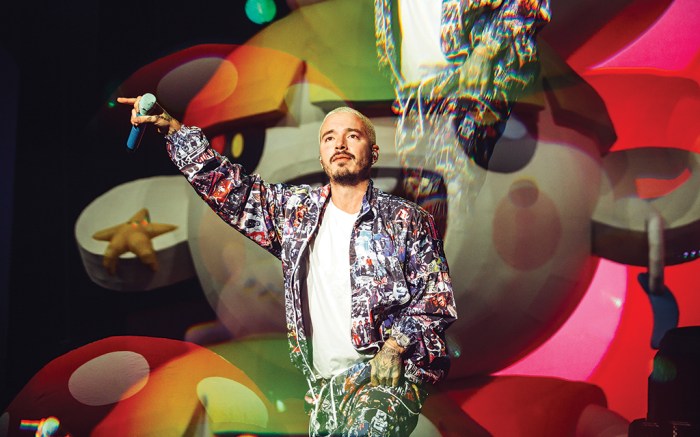 On Dec. 3, J Balvin will be honored as the Style Influencer of the Year at the FN Achievement Awards. Below is an article from the magazine’s Dec. 2 print issue about the chart-topping artist’s eye for emerging designers and his infectious energy.

J Balvin has sold out the most famous arenas around the globe, delivering his brand of reggaeton to legions of fans and cementing his legacy as a pop icon. But when the performance is over, the recording artist treats the world as his stage for another personal passion.

The chart-topping musician, born José Álvaro Osorio Balvin, has a style few can pull off. He has an affinity for vibrant hues and bold patterns. He switches from high-end fashion houses to streetwear staples effortlessly. And his outfits are always tied together with the perfect statement-making footwear.

Balvin’s eye for attention-demanding looks has largely been developed on his own, without professional guidance.

His keen sense of style has garnered the attention of the fashion community, prompting some of the biggest brands in the industry to seek a partnership with him. This year, Guess tapped Balvin for a spring collection and campaign, and Bape collaborated with the singer in August. Balvin’s partnership with Bape isn’t finished yet: A small capsule with the brand is scheduled to hit stores on Dec. 4.

But the “Mi Gente” hit maker doesn’t limit himself to labels the masses are familiar with.

“José will not only curate what he wears, but he goes searching for brands. He discovers brands,” explained designer and friend Mike Amiri, winner of FN’s 2018 Emerging Talent Award. “He goes through Instagram and looks for brands with 500 followers, 1,000 followers, or maybe it’s a kid in Ohio sewing a quilted blanket into a pair of jeans. These are the people he reaches out to.”

Balvin’s passion for discovery led him to Amiri when the designer launched his eponymous brand in 2015. It also led him to Guillermo Andrade, co-founder of burgeoning Los Angeles-based store and brand 424.

Andrade believes Balvin’s confidence and how he presents himself fascinates people on many levels.

“It’s not just, ‘He’s super cool.’ It’s everything about him. That energy shines through and you’re like, ‘What’s he wearing? What does he smell like? Why is he smiling so much? What are those sunglasses?’ ” Andrade said. “You can’t help but be captured by the man’s energy.”

Although Balvin has created clothing lines with top labels, a shoe bearing his name has eluded him. This, however, will change in 2020: The star confirmed with FN that his debut shoe collaboration will drop next year, though he was mum on more details.

Overall, the “Blanco” singer’s goals aren’t just self-serving. He also wants to elevate the stature of Latinos in fashion. “I want to change the whole perception of Latinos; I want to show the world how we are fresh, too,” Balvin said.

Andrade believes the musician is well on his way to accomplishing this.

“There is no definitive identity as a community here in the U.S. We’re all trying to find it. We are fighting to establish an identity we can be proud of,” Andrade said. “For a lot of people, José is not just the Latin guy who is stylish. To a lot of people, he’s a superstar, a style icon.”

The 33rd annual FNAA ceremony will be held at the IAC Building in New York. Sponsors for the event include Klarna, Geox, The Style Room Powered by Zappos, FDRA, Micam Milano and Buchanan’s Scotch Whisky.

Click through the gallery to see photos from the shoot.