J Balvin Shares the Inspiration Behind His Adventurous Style 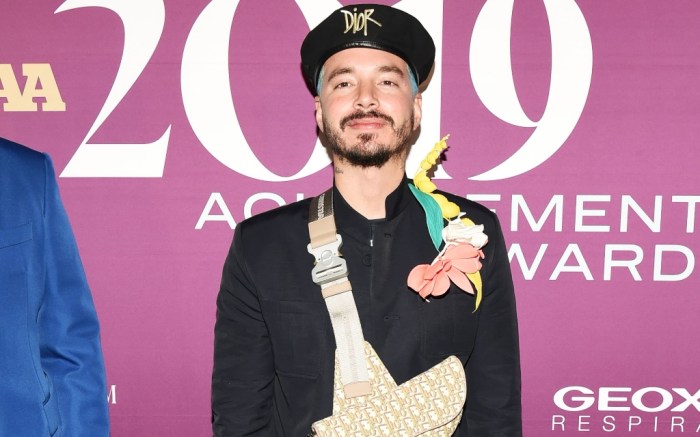 J Balvin may have amassed millions of fans for his music, but his eye-catching style is also earning him acclaim.

The chart-topping Colombian reggaeton singer has won the attention of the fashion industry with his affinity for vibrant hues and bold patterns, as well as effortlessly transitioning from high-end fashion brands to streetwear staples.

“When I was a kid, I was always curious to dress differently, but I’m still finding my style,” Balvin said Tuesday night in New York on the red carpet of the 2019 Footwear News Achievement Awards, where he was awarded Style Influencer of the Year.

“It’s like music. The more I do it, the more I find myself. At the end of the day, fashion is expression; it’s art,” he said.

On the red carpet, the singer was decked out in head-to-toe Dior, including an appliqué-embellished suit, military style hat and the brand’s popular Saddle Bag worn across his body. He topped off the look with white and gray sneakers from the luxury label.

This year, Balvin teamed up with some of the biggest names in the industry for style projects. Guess tapped Balvin for a spring collection and campaign, and Bape collaborated with the singer in August. The duo will release their latest capsule collection in stores on Dec. 4. The singer is also dipping his toe in the world of footwear, having confirmed to FN that his debut shoe collaboration will drop sometime in 2020.

“His goal is to alter the paradigm of how [Latinos] are perceived in music, fashion and to elevate their overall cultural relevancy,” said fellow Colombian Mike Camargo, who presented Balvin’s award at the 2019 FNAAs. Camargo is branding and lifestyle manager of the Upscale Vandal.

How Puma Emerged From the Shadows of Its Competition in 2019

Exclusive: Amina Muaddi on the Success of Her Namesake Brand and Her New Shoe Gig for Rihanna