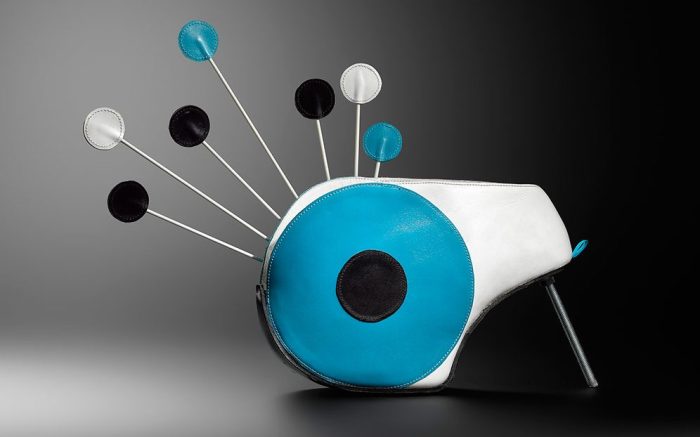 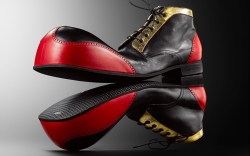 Among the more contemporary designers featured — including Pierre Hardy, Thierry Mugler and Christian Louboutin and even Nike and Reebok — is veteran cobbler Benoit Méléard, who has five pairs of shoes in the show.

In addition to his own experimental line in the ‘90s and early 2000s, Méléard’s résume takes in Alexander McQueen (remember those triangular mules in the spring ’01 Voss collection?), Robert Clergerie, Loewe, Helmet Lang and Charles Jourdan.

Méléard, now a top secret consultant for some exceptionally well known luxury and sportswear brands, gave FN the lowdown on his five exhibits during a private breakfast event before the show opened to the general public.

A surreal standout is a heeled pump resembling an eye, an homage to the mobile sculptures of the American artist Alexander Calder. There is also a sandal with a giant disc inspired by the flamboyant costumes of performance artist Leigh Bowery and a cantilevered no-heel boot. Named the Tip-Toe shoe, it was a tribute to Michael Jackson’s moonwalking days. Méléard pointed out the specks of glitter inside — remnants, he said, from one of his runway shows where maverick artist Topolino did the sparkling makeup.

The final pieces are two pairs of heels in black and white. Heels. Literally. The shoes for Jeremy Scott’s spring 2000 show basically involve heels that are strapped onto the foot and little else.

“When I started I was courageous,” Méléard said of his trajectory. “There were no politics, I had no money but shoes were my passion. I never wanted to be a rock star, but I kicked the ass of the footwear industry.”

However, according to Méléard, the shoe business has changed dramatically. “Now people want to be rock stars just because they design shoes,” he observed.

Click through the gallery to see more shoes from the Paris blockbuster exhibition.