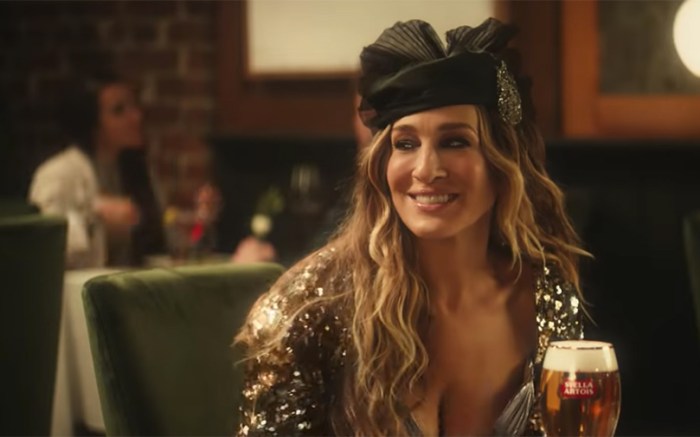 Carrie Bradshaw is back, but you won’t find her with a cosmopolitan in hand — rather, a Stella Artois beer. Sarah Jessica Parker announced last week that she would be reviving her famous “Sex and the City” character for a Super Bowl commercial with the Belgian beer brand, and the official commercial is finally here.

In the clip, Carrie orders a Stella instead of her usual cocktail, causing mayhem to break out in the restaurant from the shock of her unexpected choice. A similar scenario also ensues when another iconic movie character, “The Big Lebowski’s” The Dude (played by Jeff Bridges), walks in and orders a Stella instead of his signature white Russian. The two end up sitting next to each other and sharing a brief cheers.

The star-studded ad isn’t all about selling beer, though. It’s part of Stella Artois’ collaboration with Water.org, an organization founded by actor Matt Damon that provides millions of people worldwide with access to safe water and sanitation through microloans. As part of the campaign, called #PourItForward, every six-pack sold will fund access to six months of clean water for a person in the developing world; a 12-pack gives access to 12 months, and every bottle sold at bars and restaurants funds access to one month.

Given the shoe designer’s history of philanthropic efforts (she’s a Unicef ambassador and has worked with the Human Rights Campaign, among other advocacy groups), it’s no surprise she’s revived her character for a good cause.