Serena Williams to Play Maria Sharapova for the First Time at U.S. Open in Round 1 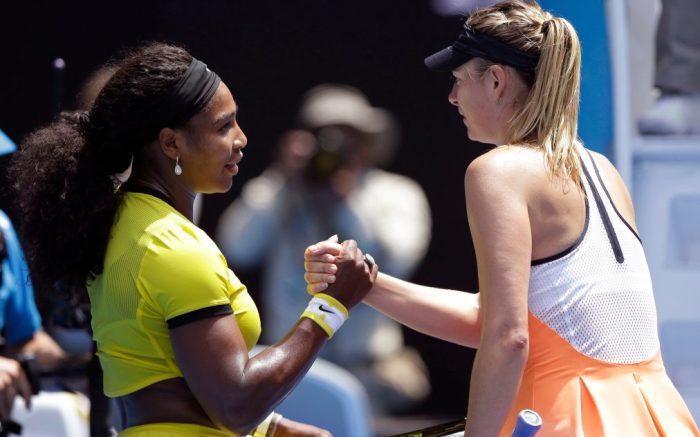 Serena Williams and Maria Sharapova have never met in the U.S. Open before — but that’s about to change.

In a draw today to determine the matchups for this year’s tournament, Williams and Sharapova were scheduled to square off in the first round.

Each woman is a prior U.S. Open winner. Williams has won the tournament six times (most recently in 2014), while Sharapova won once in 2006. They also share an athletic wear sponsor: Nike.

Having both been ranked as world No. 1 at points in their careers, Sharapova and Williams have long been rivals on the court. They’ve squared off at all three majors aside from the U.S. Open (the French, Australian and Wimbledon). The pendulum has swung in Williams’ favor — as she’s taken 19 of their 21 matchups.

Chronic injury has proved a major setback for Sharapova in recent years, with her current Women’s Tennis Association ranking down to No. 87.

Williams, ranked No. 8, is searching for her 24th Grand Slam title, which would tie the record for the most wins.

The all-time great’s most recent chance at that record-setting title came in July at Wimbledon, where she lost to Simona Halep in the finals in straight sets.

Williams is likely hoping for less drama at the 2019 U.S. Open than what she faced last year.

The Nike athlete lost to Naomi Osaka in the finals. But Osaka’s victory was overshadowed by controversy — with post-match headlines centered around a $17,000 fine Williams faced for three code violations, including coaching, breaking her racket and the “verbal abuse” of chair umpire Carlos Ramos. (Ramos will not referee matches for either Williams or her sister, Venus, at this year’s tournament.)

The $17,000 fine drew divisive reactions, with some saying Williams committed unsportsmanlike conduct and others hopping to her defense, saying the penalties were sexist. The tennis star wrote in a Harper’s Bazaar essay this July that she “won’t ever stop raising my voice against injustice.”

Williams and Sharapova will play on Monday, Aug. 26. A start time has not yet been announced.