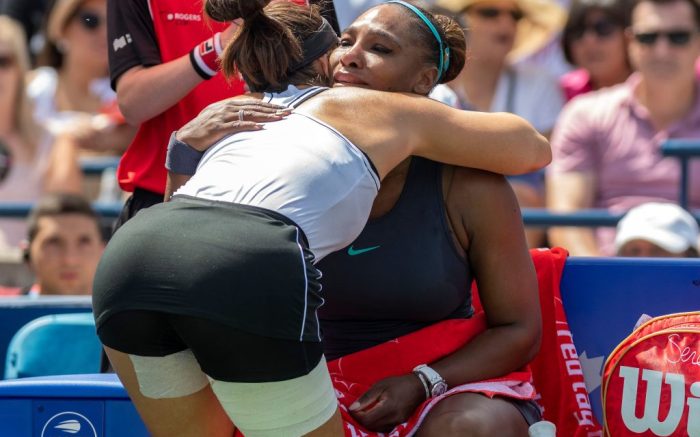 After suffering back spasms on the court, Serena Williams was forced to retire from the Rogers Cup final only four games into the first set yesterday.

With the Nike athlete injured, her opponent, 19-year-old Bianca Andreescu, was declared champion. But rather than celebrate her big win, Andreescu’s first thought following victory was to comfort her visibly upset opponent.

Not the ending we all expected, but what a moment for these two. ❤️🎾🏆

“I started tearing up because she was tearing up,” Andreescu explained at a post-match press conference. “It’s because I know how she feels. Injuries really, really suck.”

“I just said, ‘Girl, you are … a beast. You’re going to bounce back. You’ve dealt with so much in your career. This is just a minor setback for a major comeback,'” the teen continued.

Williams said her back spasms began on Saturday, during a semifinal match against Marie Bouzkova. Since the semifinal and final were played on consecutive days, she didn’t have enough time to recover.

The 37-year-old is looking for her 24th Grand Slam championship with U.S. Open play to start late this month. She had a chance to pick up the title at Wimbledon in July but fell in the finals to Simona Halep.

Flip through the gallery to see Serena Williams’ on-court style over the years.