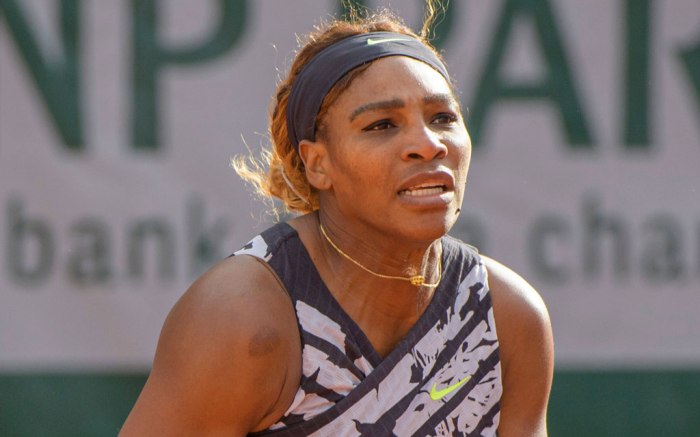 Serena Williams is back at the French Open with a vengeance.

After stepping out at Roland Garros last year in a controversial catsuit — which was later banned by French Tennis Federation president Bernard Giudicelli — the 37-year-old made a powerful statement with her 2019 look.

The 23-time Grand Slam winner hit the court for her round 1 match yesterday in a Nike x Off-White outfit designed for her by Off-White creative director Virgil Abloh. Williams walked out wearing a printed jacket with the words “Mother, Champion, Queen, Goddess” printed on it in French. The jacket was made of a performance seersucker fabricated by the Swoosh just for the athlete, dubbed “Ever.”

Underneath the jacket, the tennis star had on a sports bra and a flouncy tennis skirt with the same print. On her feet, she wore black and white court sneakers.

The No. 10 seed squared off against Russian Vitalia Diatchenko in the Round of 128 yesterday. After going down 6-2 in the first set, Williams battled back, winning two straight sets (6-1, 6-0).

The star’s next matchup is on May 30 against Japan’s Kurumi Nara.

Both a baseball cap and a T-shirt inspired by Williams’ Nike x Off-White look were made available on the Nike website. The T-shirt — which retailed for $55 and featured Abloh’s signature quotation mark-adorned graphics — has sold out. Priced at $24, the hat is not available to shop online yet; it comes adorned with the words “I will never quit” in French.

Click through the gallery to see more of Serena Williams’ tennis style.