Exclusive: Rapper Meek Mill on His Incarceration and How Puma Is Getting Involved in Criminal Justice 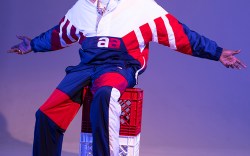 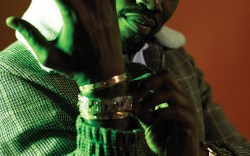 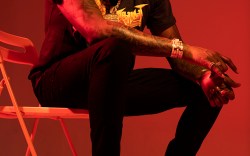 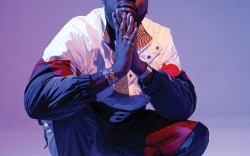 “I’m great, but I’m tired as hell,” the Puma-backed artist said, sinking deeply into the studio’s plush leather couch and scrolling through his iPhone.

Nevertheless, Meek is a seasoned music industry veteran, and he is able to turn on the charisma that he’s known for when photographer Cam Kirk pulls out his camera. The rapper is open to direction and sometimes takes the lead on-set, while using the time in between looks to recover from his weekend.

The fatigue is fitting, given his relentlessly busy schedule since being released from the State Correctional Institution in Chester, Pa., in April.

In the 10 months since Meek has been free, he has performed at the Made in America Festival in Philadelphia in September, delivered his fourth album, “Championships,” which debuted at No. 1 on the Billboard 200 chart, and kicked off January with an appearance on “Saturday Night Live.”

And on the weekend of Super Bowl 53, the Philadelphia-based musician performed alongside Cardi B in Atlanta and booked a second show in the city immediately after the game.

Next up, on Feb. 19, he will kick off “The Motivation Tour,” with stops in 16 cities in less than two months.

“Meek’s work ethic is unparalleled,” said Michael Rubin, the co-owner of the Philadelphia 76ers, who has become a friend to the rapper.

“It takes mental toughness to endure his unjust incarceration, but he’s managed to turn the negative into a positive that will impact millions, and I’m incredibly proud of him.”

In November 2017, Philadelphia County Court of Common Pleas Judge Genece Brinkley handed Meek a two- to four-year sentence for probation violations stemming from an arrest on gun and drug charges 10 years earlier. (He would serve only five months.) The violations were widely viewed as petty, and the sentence was deemed heavy-handed, drawing public criticism from the world of celebrity, including rap legend Jay-Z.

But Meek Mill isn’t letting the circumstances surrounding his most recent bid defeat him. In fact, he’s using it as fuel for change.

Alongside Jay-Z, Rubin and others, Meek in January launched the Reform Alliance, an organization with a mission to reduce the number of people trapped in the criminal justice system, starting with an overhaul of the cyclical nature of probation and parole.

And Puma is backing his efforts.

“Meek has a purpose, and he is clear on what he wants to accomplish. Reform is a part of his life in the same way making music is,” said Adam Petrick, Puma global director of brand and marketing. “Puma has a long history of supporting the causes of our partners. If you’re an ambassador of Puma and something matters to you, then it matters to us. Not only do we have an opportunity with Meek, but we have an obligation to make a commitment.”

The efforts started with the launch of the brand’s #Reform social change platform in October (supported by Olympian Tommie Smith and WNBA star Skylar Diggins-Smith), followed by the release in February of a special Clyde Court basketball sneaker, with all of the net proceeds going to the Reform Alliance.

Here, Meek Mill speaks with FN about the support of Puma and how his experiences and high-profile friends have helped him reach a place of maturity.

What did your most recent stint in jail teach you?

“I wouldn’t say it taught me anything. It didn’t do nothing for me, really. I guess the blessing of going to prison was, it gave me a platform to speak on reform. But not anything valuable comes from [being in] prison.”

Are you concerned that people may reject your prison reform messaging in light of your criminal record and affinity for the fast life?

“No. People have the right to judge you however they want to judge you. The people who know me and are interested in me, I focus my energy and attention on those people. If you’re a person that’s placing judgment on me and not trying to see what I say, then it may not be meant for you to get my message.”

What are your thoughts on the Pennsylvania Senate in January introducing Bill 14, which would cap probation lengths?

“Probation is supposed to be designed to help people rehabilitate themselves after prison, give you a stepping stone to keep you on track to not go back. I’ve been on probation for 11 years, went to prison [in 2017] for not even committing a crime. Nobody should go to prison all those years later for what they was initially accused of, for not even committing a crime. How does that help people prosper?”

How can Puma best help you promote your prison reform platform?

“Puma is donating money to my foundation; they’ve been in full support of Reform [Alliance]. I have a sneaker out, and everything net that we make from the sneaker gets donated to Reform. Puma has done #Reform commercials with me on live TV, social media. They’ve supported it in the fullest way.”

What do you hope to accomplish with the athletic brand and your prison reform campaign?

Will all of your future collabs be tied to this mission or will you also work on lifestyle looks?

“That’s for the future to tell, but for now, it’s #Reform that we’re working on. Puma naturally wanted to be involved, so that’s what we’re going to focus on until next season comes up and we get down to business and go over the plans.”

After spending years with Puma, you separated in 2016 but are now back together. What changed your mind?

In the past couple of years, Puma has delivered collections with several high-profile celebs. Did the success of those releases add pressure on you to produce collabs people love?

“No, I don’t look at it like that; I just like fly stuff. And anything I come out with, I want it to be good, so I’ll put pressure on myself for just wanting to have a good sneaker.”

What would you like to accomplish with the brand?

What’s your favorite Puma sneaker of all time?

“I always liked Clydes a lot, and now I like the RS-X — they’re my favorite Pumas right now. I love the Cells, too.”

While you are often surrounded by fellow rappers such as Jay-Z, you also hang out with people outside of music, such as pro sports team owners Robert Kraft and Michael Rubin. How did these relationships form?

“I’ve been knowing Mike Rubin for four years, and if you follow my Instagram, you’ve probably seen him. Y’all probably ain’t knowing who he was, thinking he was just a white guy on my page joking around sometimes and things like that. But Michael Rubin, he’s on the side of right. I’ve been knowing Kraft two and a half years, probably. I told him something is going on with my people that’s got ahold of us and we can’t break away from it, because laws are presented certain ways, and structures were built for failure. So he joined as a good person on the side of right. And I’ve been knowing Jay-Z six or seven years. He’s on the side of right. And all my other partners are people I met through Reform Alliance, like Clara Wu Tsai, Daniel Loeb, Robert Smith. Shout out to Michael Novogratz — we met through the foundation.”

How instrumental are these friends in carrying out your message?

“Robert Kraft, Michael Rubin, Jay-Z — all three of them are older than me, so they’re very successful people, powerful people who been in the game and knowing major things in so many different aspects. I get advice, I learn from them, I get inspired from them. Some of them get inspired from me, and we just kick it the way we kick it.”

What is the best advice they have given you?

“A memorable one from Kraft is to have boundaries in life. We were talking about me getting locked up for wheelieing a dirt bike, and he was like, ‘You shouldn’t go to jail for wheelieing a dirt bike. You are somebody. You have a lot of influence, and you don’t want to go from a $20 million business meeting to popping a wheelie down the city streets. You could fall and hurt yourself, kill yourself.’ Jay-Z, he’s given me advice about staying strong and always pushing forward through trials and tribulations and things like that. And Mike Rubin, we talk about business; I learn a lot of business stuff from him.”

Your latest album, “Championships,” includes a lot of mature subject matter. Will the serious social themes continue in your music?

“If people really listen to my past music, it’s the same thing. I think people are listening differently now because of the storyline that’s laid out with me talking about reform and what I’m going through. People are hearing it and seeing it at the same time, so it’s a little bit more believable. But my music has always been that way.”

You’ve teased another installment of your popular “Dreamchasers” series. What can fans expect from your next project?

“I’m coming out with a compilation with a bunch of artists that we deal with. We’re picking who we’re going to use now. I don’t have the timing on it yet because I’ve been busy. We’re still picking. I was giving people a teaser [on Instagram].”

One of your peers, Kanye West, has received backlash for taking political positions that are contrary to those of much of his fan base. Does that make you hesitant to talk about serious issues, knowing you could upset fans who might disagree?

“I don’t really care. Social media is a world where we make money; it’s like a business for us. We showcase our lifestyle, we communicate with the people who like us and are interested in our lives. It’s not like a real world to me.”

How did you and Drake come to end your public feud? And is this something we’ll see more of, opting for peace instead of problems?

“Nothing lasts forever. We had something going on for two or three years, but I’m older now — I’m 31 years old. I can’t be the same way I was when I was 27 or 28. Everything about me is maturing.”

Click through to view more exclusive photos of Meek Mill from the FN cover shoot.

Puma Signs a New Multiyear Deal With the NBA