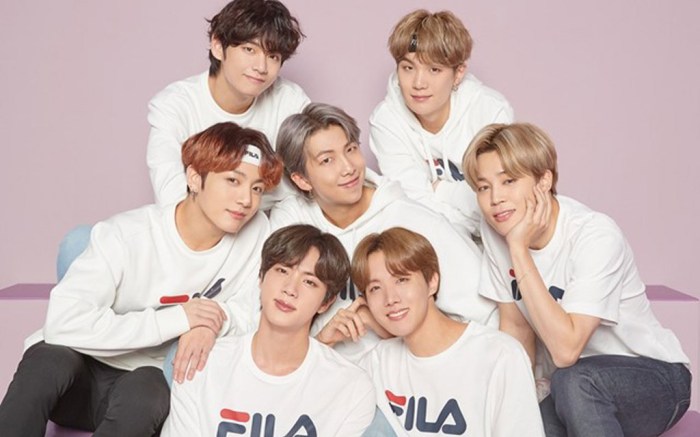 The sportswear giant today revealed an image from its first BTS campaign shoot. In the photo, the seven members of the K-pop group (V, Jungkook, RM, Jin, Suga, J-Hope and Jimin) are shown in a mix of classic white T-shirts and hoodies with Fila’s linear logo. The looks are meant to coincide with BTS’ personal style, which is harmonious but allows for individuality among the boys.

While only one photograph is available for now, fans can look forward to more in the New Year. Fila will roll out a complete ad campaign in January 2020. The ads will appear internationally across Fila stores, brand websites and social media channels.

“We decided to offer a surprise sneak peek of the campaign, in an effort to express our appreciation [for] the support,” a Fila spokesperson said in a press release. “With an undeniable synergy between Fila and BTS, and the positive feedback we’ve received from consumers, we look forward to sharing more in the coming year.”

BTS was announced as Fila brand ambassadors in October. Prior to teaming up with Fila, the group worked with Puma for five years, appearing in a series of marketing campaigns as well as releasing signature products in partnership with the German athletic company.

Click through the gallery for BTS’ best style moments of the year.