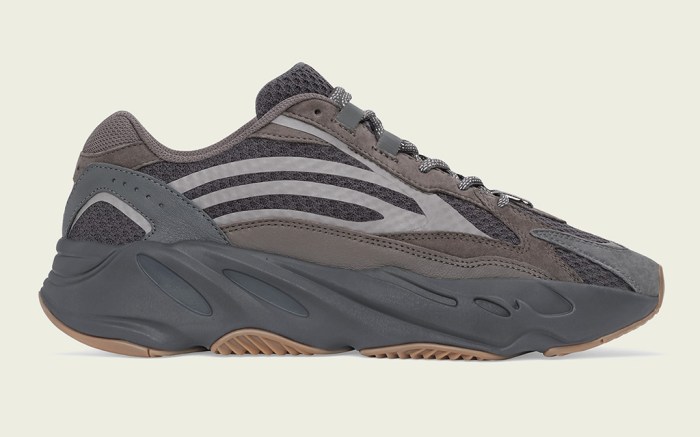 This weekend featured the latest installment of the popular Adidas Yeezy Boost 700 V2 sneaker in the “Geode” colorway and, as expected, sold out instantly. If you weren’t able to secure your pair on release day, here are a few options post-launch.

The dad-styled sneaker boasts a bevy of brown and gray hues on the breathable mesh upper that’s complemented with leather overlays. Branding is kept to a minimum including subtle Three Stripes details on the lateral and medial sides. The standout feature is the chunky Boost cushioned midsole with a gum outsole. The limited-edition sneakers are available in a variety of resale locations including on Flight Club for prices as low as $325, which is only $25 more compared with its retail price of $300. Another option would include StockX featuring a full-size run of the coveted kicks available for bid right now.

Unlike prior Yeezy launches, Kanye West and Adidas partnered up with families across the country to drop the “Geode” Yeezy Boost 700 V2 in homemade lemonade stands ahead of its scheduled release date with all proceeds benefitting mental health awareness.

In other Yeezy related news, the highly anticipated Yeezy Boost 350 V2 “Clay” will officially launch on March 30 exclusively in North America and Latin America at select retailers and Adidas.com. The shoe will retail for $220 in adult sizing.

Adidas Yeezy Boost 700 ‘Inertia’ Quickly Sold Out, but Here’s How You Can Still Get the Kicks

Over 20 Yeezy Releases Slated for 2019; Adidas CEO Says Some Styles Will Still Be Hard to Get