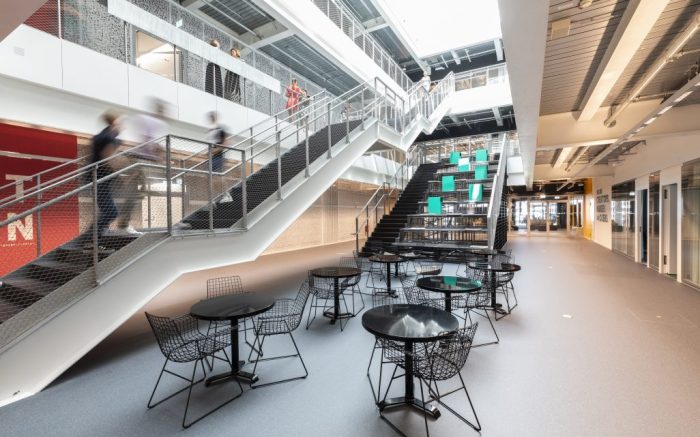 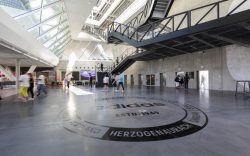 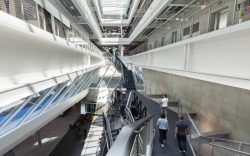 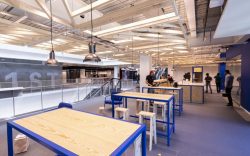 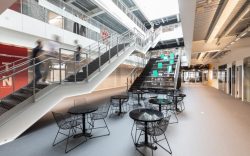 This month, Adidas marked its 70th anniversary — and the opening of a brand-new building at its Herzogenaurach, Germany, headquarters.

Called “Arena,” the new building — designed to resemble a soccer stadium — was unveiled Aug. 9 after 34 months of construction. From the distance, the building appears to float on 67 columns made of steel and composite. Inside, Arena features three stories with a combination of open space and retreat-like rooms.

The central staircase of the building features 136 steps. If employees walk up and down the stairs once each workday, they will have expended as much energy as is required to complete a marathon by year’s end.

Before Arena opened, the newest building at the HQ was “Halftime,” which opened in 2018. Halftime includes meeting rooms designed to look like sports’ terrains and a company restaurant that can feed up to 2,000 meals per day.

The workout facilities may be the most impressive of the headquarters’ offerings. From a soccer pitch and beach volleyball and tennis courts to a running track and bouldering facility, employees can participate in a wide range of sports on-site. Additionally, Adidas has a gym that offers courses like CrossFit and yoga. (The fitness studio is currently being expanded, along with the daycare center.)

HQ by the Numbers

The Herzogenaurach headquarters are home to 5,600 employees, with the complex, called “World of Sports,” comprising around 145 acres. Set on the site of a former military barracks, the HQ opened with the “Spikes” building in 1999. In 2011, “Laces,” a modern office building with 63,000 square feet and around 1,700 employees, opened its doors.

Adidas has invested around 1 billion Euros into World of Sports since 1999; Arena and Halftime alone cost about 350 million euros.

Today, the Three Stripes employs 57,000 employees internationally — a long way from its beginnings in August 1949 with 47 employees.

The sportswear giant is hardly alone when it comes to offering its employees lots of perks.

Reebok has Boston, Mass., digs complete with a FitHub store for testing new formats and features; a 2,000 square-foot archive and a two-story gym offering 20-plus classes daily. (Adidas owns Reebok, which it acquired in 2005 for $3.8 billion.)

Meanwhile, the Zappos HQ in Las Vegas comes complete with a nap room, a ball pit and retro arcade games in the lobby and an auditorium for movie screenings.

Click through the gallery to see more images of the Adidas headquarters.

How Adidas Used 3D Design to Cut Down on Sample Waste