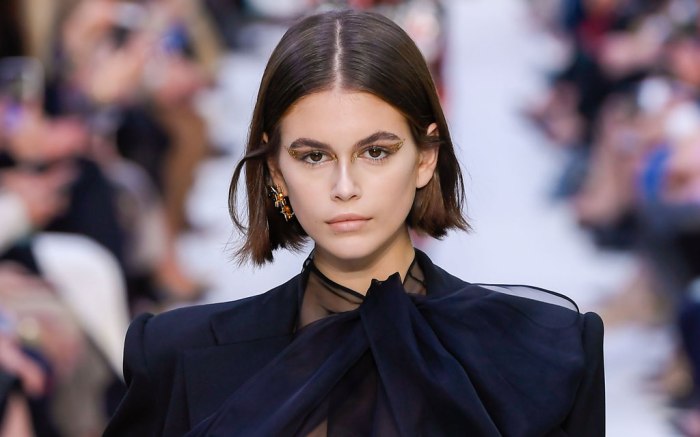 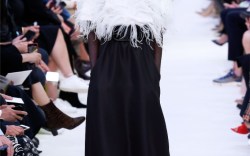 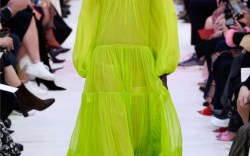 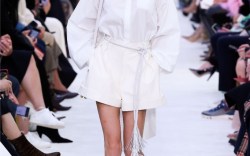 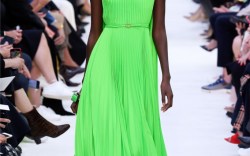 Designer Pierpaolo Piccioli’s creations for Valentino are known for being dreamy and extravagant, but over the past few seasons things have gotten a bit more casual, with the launch of the streetwear-influenced VLTN line in early 2018 for men and a collaboration with Birkenstock in January 2019.

For spring ’20, Piccioli combined the two for a collection that is the best of both worlds. Fantastical gowns in delicate lace and organza mingled with tailored pieces done in bright neon hues. And though Birkenstock didn’t make an appearance, the flat sandals that walked the runway indicated that perhaps the Valentino woman doesn’t want to go back to an uncomfortable heel — even if she’s wearing a couture gown.

The sandals conveyed a vacation-like ease, and many had a thong toe and rope detailing that wrapped around the ankle (some even had feathers attached to them). Some also had Valentino’s signature Rockstud detailing, done in monochrome.

The shoes were paired with gowns and tailoring done either in angelic white, sophisticated black (like model Kaia Gerber’s look, with an organza blouse and skirt suit) or an array of bright neons. A lime green gown matched the window panes inside the show exactly, while a series of hot pink gowns further confirmed that it is the color of the season.