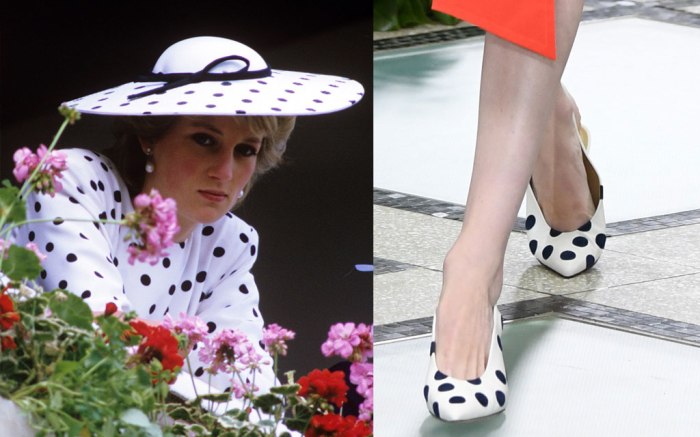 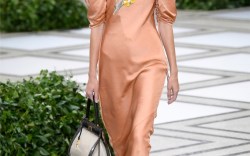 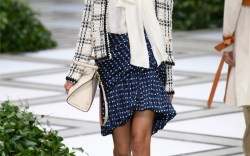 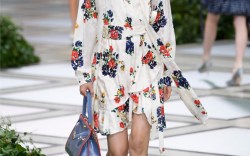 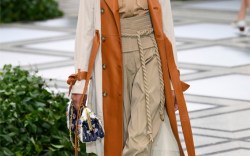 Princess Diana’s ‘90s sweatshirts and biker shorts might be inspiring a trend even now — for further proof, see Hailey Baldwin’s daily wardrobe lately. But when Tory Burch channeled the late style icon at her show Sunday, she turned to the early ‘80s, right before she became a princess and when she was still just Diana Spencer.

In spirit, Burch was inspired by the princess’s humanitarian efforts and how they reflect the ideals of her own Tory Burch Foundation. But the fashion itself recalled some of the key photos of Diana during her courtship to Prince Charles, circa 1980–1981. “The ‘80s were not my favorite time from a style standpoint,” Burch told FN after her Sunday morning show, which was held at the Brooklyn Museum. “But I loved elements of it, so I wanted to do a bit of a different take.”

That included pussy bows and wide ties on blouses and dresses, reminiscent of the innocent-looking neck accouterments Diana wore when she was still working as a kindergarten teacher. There were also plenty of wholesome English florals, including the opening look, worn by model Natalia Vodianova, a lacy white dress with a handkerchief hem pieced together from actual handkerchiefs that were delicately embroidered with various floral motifs.

But the most Princess Di moment of the show was a pair of kitten-heel slingbacks in polka dots. It was arguably the princess’s preferred pattern (later on, it would become a more defiant leopard print). “They’re my favorite shoe,” said Burch. She did them in simple black-and-white (both ways), with a lacquered kitten heel, appliqué dots, a slingback profile and a slightly higher vamp on the toe, to keep it looking modern. “I hear it from women today that they just want to wear kitten heels and smaller heels in general. Women want to be more comfortable,” said Burch. “I wanted to think about what the perfect kitten heel would look like.”

Burch also continued her run on sneakers, which account for a good portion of her shoe business today. “The ruffle is something that we’ve become known for. I wanted these to look like a little more of the past but then also keep them in the present,” she said. She also did another loafer with a stacked heel, bringing back the gold chain-link jewelry hardware that has been used in previous seasons.

For any Tory Burch client loyal to a high heel, there was also a classic pump accented with bows, a style the designer herself was wearing in daffodil yellow for the show. “We’re doing [them] on shirts and bags, but we wanted to do them on shoes as well. They’re so comfortable [even though they are] a little higher,” said Burch.

The entire collection begs the obvious question:  Will Meghan, Duchess of Sussex wear it?

Flip through the gallery to see the full collection.

Carmelo Anthony Explains Why ‘Melo Made 2’ Did Not Include Footwear