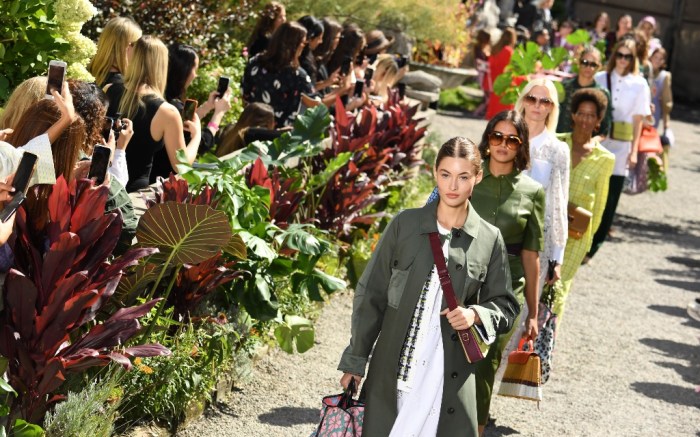 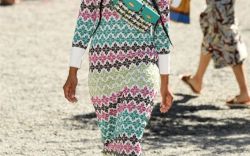 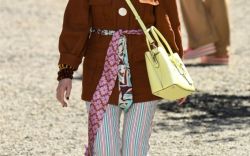 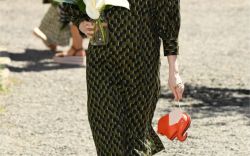 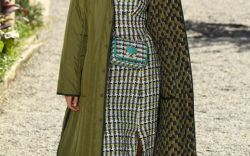 It was the perfect setting for a spring ‘20 collection inspired by the urban, plant-loving woman (i.e. plenty of millennials). Models walked the gravel garden pathway in floral prints and leather neutrals, and most carried large potted plants, bouquets, and fans of palm leaves. “When I first moved here, living in the East Village, it was such a joy to find these little pockets of green,” creative director Nicola Glass told FN backstage before the show.

The setting also helped to explain why Glass chose flat, practical shoes to go with her city gardener looks. “All of the styles are very comfortable. We were really looking for flat shoes,” she said. “I think it’s about just the ease of walking, with the idea of women walking in New York City. It’s just more realistic and that’s what my team and I wanted. It’s what we wear.”

Among the flats were a series of Dr. Scholl’s Original Exercise sandals, which received the Kate Spade treatment in suede and prints with metal studs, which will be shaped as hearts in production. “I’ve always loved Dr. Scholl’s; my mum used to wear them when I was younger,” said Glass. “They’re the kind of shoe for every woman.”

There were also three other styles, a slide sandal, which will start at $98); a flatform done in a knit jacquard; and an open, airy sneaker. Spring ‘20 will be the first season in which Kate Spade will produce its footwear in-house.

“Footwear is such a big opportunity for the brand, and we are part of Tapestry, so we can really leverage their resources from a production and quality standpoint and have total control over the design and production,” said Glass.

The success of shoes will be important for the brand as it looks to turn around the business under Tapestry. This week, new CEO Jede Zeitlin — the Tapestry chairman, who took the reins after the exit of Victor Luis — acknowledged there had been “hiccups” in the integration of Kate Spade but expressed optimism about the opportunities ahead. Industry insiders have been concerned about the performance of the label for several quarters, and the slower-than-expected progress was one factor in Luis’ departure.

Casting the show with a variety of real, mostly New York-based women was also important for Glass. They included longtime New Yorker and actress Debi Mazar and her daughter, both of whom walked the runway, along with model Karen Elsen and influencer Lyn Slater of Accidental Icon.

The brand also donated its entire show fee to the NYC public parks for funding of the one-acre Elizabeth Street Garden, which is in the midst of a fight for its land ownership.