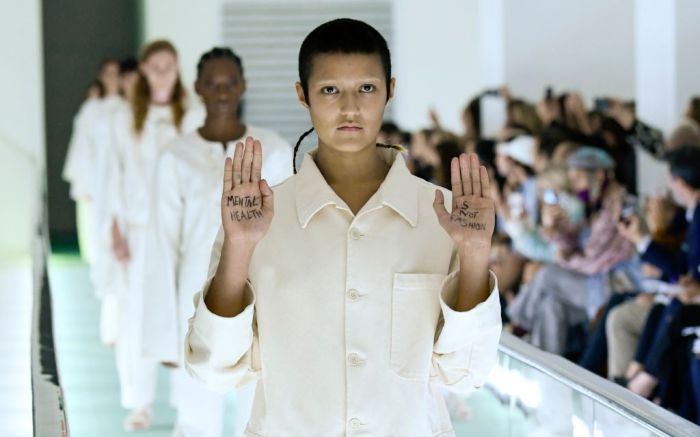 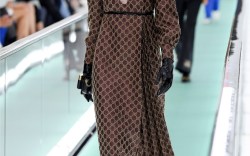 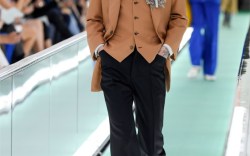 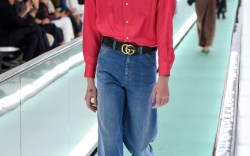 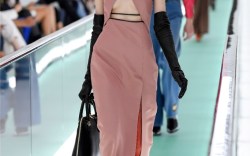 The initial Gucci show always happens outside the official show. The promise of a very prompt start time at the brand’s Sunday spring ‘20 event had a handful of editors cordoned off to wait while the show’s VIPs entered so they would have time to take photos on the step-and-repeat before the usual audience of buyers and press filed in.

Later on, the front row would reveal to be as star-studded as ever, with A$AP Rocky, Iggy Pop, Sienna Miller and more mingling with Gucci president and CEO Marco Bizzarri and Kering chairman and CEO François-Henri Pinault. But everyone knows that the top-tier clients are the real VIPs, and it was they who held court at the door before the show.

It’s no secret that many of those VIPs are Asian, particularly Chinese. For anyone wondering who actually buys and wears some of the more fantastical pieces that Alessandro Michele has created for Gucci in his four-year tenure, look no further than the Asian consumer for the brand’s real runway. At the show’s arrival entrance, they spilled out of their black cars in sparkly suits, tulle, crystals, full-on logo ensembles, Mickey Mouse bags and all of the other whimsical pieces that most American consumers would balk at.

Witnessing the decadence and commitment to that imaginative, fanciful, sometimes superfluous sort of high fashion in real life helped set the stage for this season’s show. Instead of show notes, the program included only an essay, in both English and Italian, titled “New Forms of Subjectification.” It was difficult to read under the glowing red lights inside the venue, but it was important.

Describing a “microphysics of powers” in society today, the essay spoke of an entity that “imposes behavioral rules internalized by individuals.” Referencing French philosopher Michel Foucault’s theory of biopolitics, the essay continued with a condemnation of “a power that imposes conducts and paths, that prescribes thresholds of normality, that keeps under surveillance and punishes, that classifies and curbs identity chaining it to what is preconceived.”

Could Gucci be talking about China? Amid the red-tinted room with stars on the ceiling like those of the Chinese flag, it was difficult to ignore the juxtaposition of that boisterous self-expression on the step-and-repeat and the reminder of the country’s restrictions on some of those very same people. Without true freedom of speech and press, fashion feels like one of the last grasps for its citizens — and maybe the reason why they dive headfirst into Gucci’s wild creations.

But this wasn’t the only thing that Gucci could possibly be hinting at. The show opened with a handful of models standing on a moving walkway, wearing neutral canvas garments that appeared to be either variations on a straight jacket or uniforms that mental patients might wear. One model held up her hands to reveal the words “Mental health is not fashion” written on them. Was this a public service announcement? A critique on society today in which the spring ’20 season would be sacrificed? It’s still unclear now, but the thought of an entire collection of drab, prisonlike uniforms instantly created a desire for the usual flourishes of Michele’s creations.

After a few minutes of this, the lights went out suddenly. In the dark, models ran down the runway as a static noise played over the loudspeaker. Suddenly, the lights came on again, in fluorescent brightness, revealing the real collection: The Gucci as we know it. People laughed and a collective sigh was released in the room. It was as if the show was actually “The Wizard of Oz,” and the drab black-and-white world finally turned to Technicolor again.

Models walked fast on the moving walkway, showing off a continuation of the sleek tailoring that the brand has developed in more creative ways over the past few years (especially with the help of Dapper Dan). Structured suits with a variety of proportions (and one in a flowing green silk) were paired with Western-style boots and two-strap black leather sandals with a secured heel. Women’s looks were modernly feminine and brightly colored in orange, lime green, lilac, pistachio, coral. A new flat silhouette resembled an open-heeled ballerina, with the signature horsebit hardware but also another strap in a silver chain link.

The looks were bold, but not as peculiar or perverse as past Gucci collections. There were no spiky masks, no crystal unitards, no baby dragons or models carrying their own heads. The sign at the step-and-repeat outside read “Gucci Orgasmique” and the show’s soundtrack included a long remix of Madonna’s sexually deviance anthem “Justify My Love,” both hinting at a sexual freedom. But aside from some sheer tops and gowns showing the nipples of a few models and a few slip dresses with patent leather and lace (and some footwear that could best be described as a boot-chap hybrid), the collection was actually quite tame.

But if self-expression was Michele’s — and Gucci’s — goal, there appeared to be something for everyone. The front row also reflected that, with names like Gucci Mane, Sinead Burke, Hari Nef and Kelsey Lu. In July, the brand hired Renée E. Tirado as its first global head of diversity, equity and inclusion, and the lineup was a clear reflection of those recent efforts, especially after a few gaffes earlier this year. “That’s the only way fashion can be constitutively resistant: allowing each and every one to creatively build their own place in the world, beyond any normativity imposed from the outside,” concluded the essay in the program. In a fashion week still devoid of any true inclusion and diversity, Gucci stood out at Milan for this very message.

Sandra Choi’s Vision for Jimmy Choo’s Spring ’20: ‘Anything But Plain’