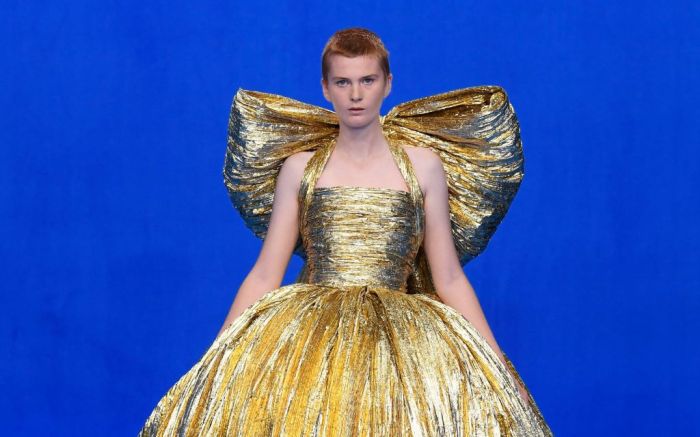 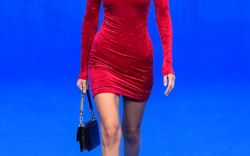 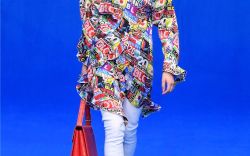 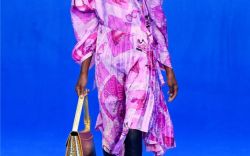 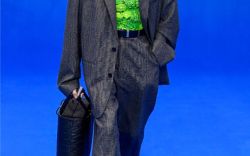 Just a year ago, Balenciaga was still enjoying its “dad shoe” heyday, with the wild success of the super-chunky, super-desirable Triple S sneaker, along with its follow up, the hiking-inspired Trek.

But a lot can happen in a year — especially in fashion — and at the French fashion house’s Sunday show during Paris Fashion Week, Balenciaga did a total 180, swapping dad sneakers for ballgowns.

Against a cobalt blue backdrop, creative director Demna Gvasalia sent out a series of evening gowns. Some had the same body con sleeves of his signature mini dresses, while others had giant metallic bows attached to a sleeveless bodice. They all had gigantic, sweeping skirts, courtesy of what look like the largest crinolines underneath, forming perfect, exaggerated circles.

Elsewhere, the lines were sharp as ever and the colors just as saturated as last season. Tailored jackets and bright midi dresses had even more exaggerated shoulders and Bella Hadid walked the blue runway in a red velvet off-the-shoulder body con mini dress that was paired with lace-up pointy toed white pumps.

It was all an amplification of last season’s sharp, colorful, serious lines. And at a time when most other brands are going for a comfortable sandal or easy mid heel, Balenciaga doubled down on the pump with a stiletto heel. There were also plenty of slick over-the-knee boots.

Sneakers didn’t disappear entirely, though. On a few of the menswear looks, a curious sneaker popped up. Instead of a chunky sole like the Triple S, this one appeared to be much more aerodynamic. It also had “Tyrex” on front and had what appeared to be an angled square toe — certainly a unique new progression in fashion’s current favorite footwear trend.

In a season when some are wondering if the fashion sneaker is dead, Balenciaga once again begs the question.

Click through the gallery to see the full Balenciaga spring ’20 collection.