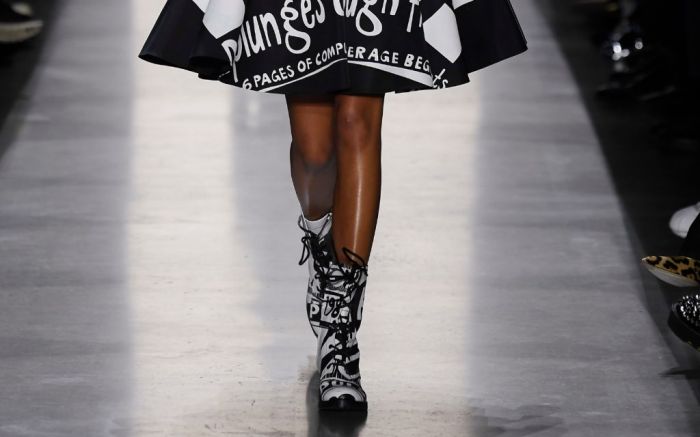 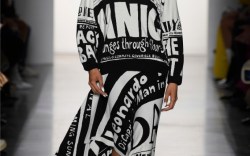 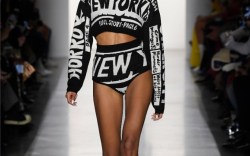 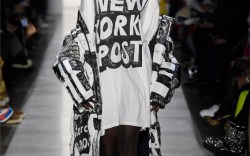 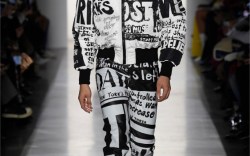 Jeremy Scott has always written his own headlines. Season after season, the veteran designer has distilled pop culture themes into clever creations that are fun, joyful and, yes, over the top but also subversive and often subtly critical of the culture they portray. In the seasons since President Donald Trump took office, Scott has been even more vocal in his politics, both in interviews and on the runway. At the finale of his spring ’19 show today at New York Fashion Week, Scott walked out wearing a white T-shirt that read: “Tell Your Senator No On Kavanaugh 212-902-7129”.

This season amped up his message. Scott took a literal approach to the idea of headlines for his fall ’19 collection, putting a slew of them on each and every look, on the backs of jackets and across punky tutu dresses, all the way down to the Dr. Martens that accompanied them.

According to the New York Post (whose namesake was emblazoned on the majority of the looks, and thus rightfully gained the exclusive on the collection), Scott was inspired by his friend Aleksandra Mir’s 2007 collection, titled “Newsroom 1986–2000.” Done entirely in an apropos black-and-white palette (save for a few denim pieces), Scott’s headlines ranged from one-liners like “Scandal,” “Meltdown!” and “Chaos!” to longer crime- and sports-themed phrases, some of which ran long down belts and sleeves. “The End is Near” appeared multiple times on the backs of jackets and was open for interpretation, political or otherwise.

The political message may have been subtle, but with the frequency in which Scott has voiced his views in interviews, one can expect even stronger messages from the designer going forward.

Click through the gallery to see all the looks in the collection.