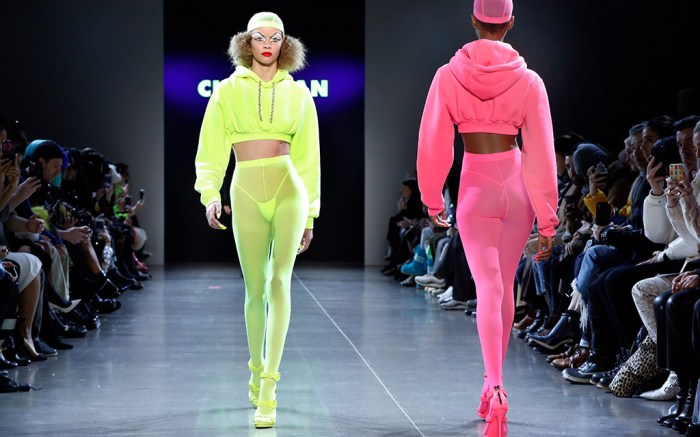 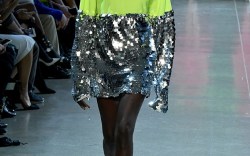 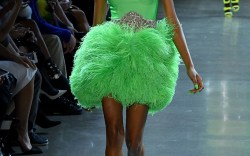 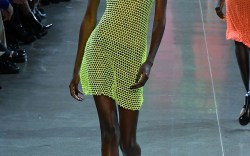 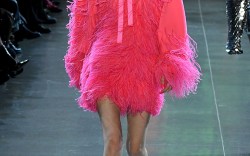 Time flies when you’re having fun. Giuseppe Zanotti and Christian Cowan have teamed up again for their second shoe collaboration, which was unveiled today during New York Fashion Week.

Christian Cowan presented his fall ’19 runway show at Spring Studios to a packed crowd, including model Slick Woods and Karrueche Tran. The collection was beyond colorful, filled with bright neons and metallic embellishments.

Last season, Zanotti and Cowan created a line of shoes inspired by watches, which caught the attention of Cardi B, Rita Ora and Kim Kardashian West.

This time around the designers were inspired by the online culture of influencers and the “break the internet” mentality. Styles from the first collection were updated in fluorescent colorways, such as green and pink.

“Christian is so young, but he’s so mature. It’s a good synergy to combine his powerful ideas and with my experience.” Zanotti told FN, adding that the designers dream up their ideas over FaceTime.

He said, “Using watches with shoes is unusual. We set out to create something very different. This season is a continuation of the same theme but with different color combinations, bright colors, which is [not typical] for fall.”

Following the gold version of the wristwatch sandals comes silver and matte black iterations for fall ’19. Boots were also added to the line, featuring peep-toes detailed with a single watch at the ankle.

“There is so much energy around Christian’s collections,” Zanotti said. “Everything is different from other designers and that’s important for the U.S. It’s unusual for the States to have this kind of fashion. More often, you would find it in Europe.”

The shoe collab will go on sale starting in September at select Giuseppe Zanotti boutiques and online, retailing from $1,495 to $4,650.

Click through the gallery to see the entire Christian Cowan collection.