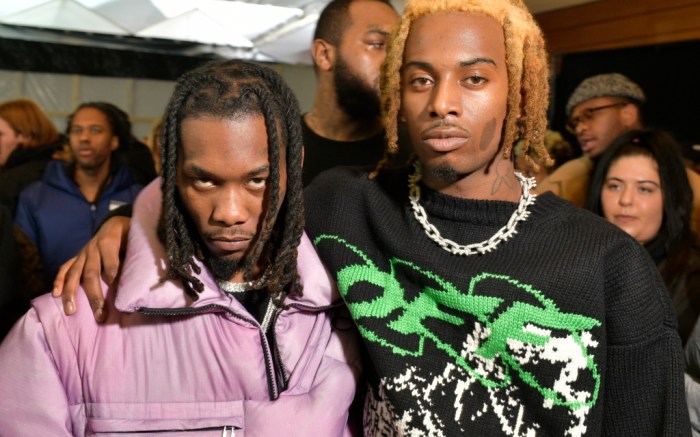 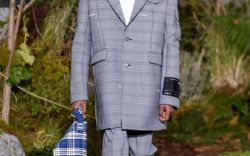 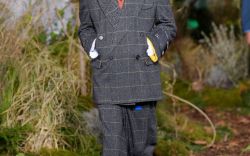 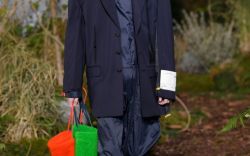 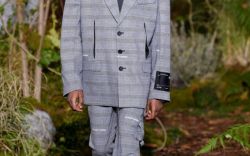 Given how much hype that comes with every Off-White x Nike collab, Virgil Abloh’s footwear feels inextricably linked to the sports giant. So when the designer presented his fall ’19 collection today at the Louvre Museum during Paris Fashion Week Men’s, it was to everyone’s surprise that there were no Nikes in sight (on the runway, at least — plenty of showgoers still repped them).

Instead, there were exaggerated fringed boots that swung with every step, chunky hiker-style sneakers, loafers with colorful accents at the heel and sole, and cowboy styles in bright hues and decorated with studded straps or chains.

The vivid all-terrain hikers, which came with elevated soles, felt especially appropriate, as the show was staged as a lush garden. The lineup of models included rappers Playboi Carti (who also modeled in Abloh’s Louis Vuitton spring ’19 show) and Offset, both of whom were suitably dressed for the great outdoors.

Abloh was quite liberal with color, which played out mostly in the garments. First came subdued shades in light pinks and purples (as seen on Offset’s enormous puffer coat) before segueing into oranges and yellows and ending in green looks (see: Playboi Carti’s bright green pants). The use of color still provoked an enthusiastic response, including from Dean Cook, Browns Fashion menswear buying manager.

The collection also felt more formal (a movement that gained ground at London, Pitti and Milan), with oversized suit jackets layered over nylon overalls or under shiny bombers and matching pants. There were also spliced versions, one side that was business and the other more casual with checks or tweed.

Abloh has had horticulture on his mind. He once quipped that when his commitments become too much, he plans to quit fashion altogether and take up gardening. The jury’s still out on whether he was being  serious or if he was teasing his next project, but you can never quite tell with him.

Click through to view the entire Off-White fall ’19 collection.